What are the threats behind the militarization of the fight against deforestation in Brazil? 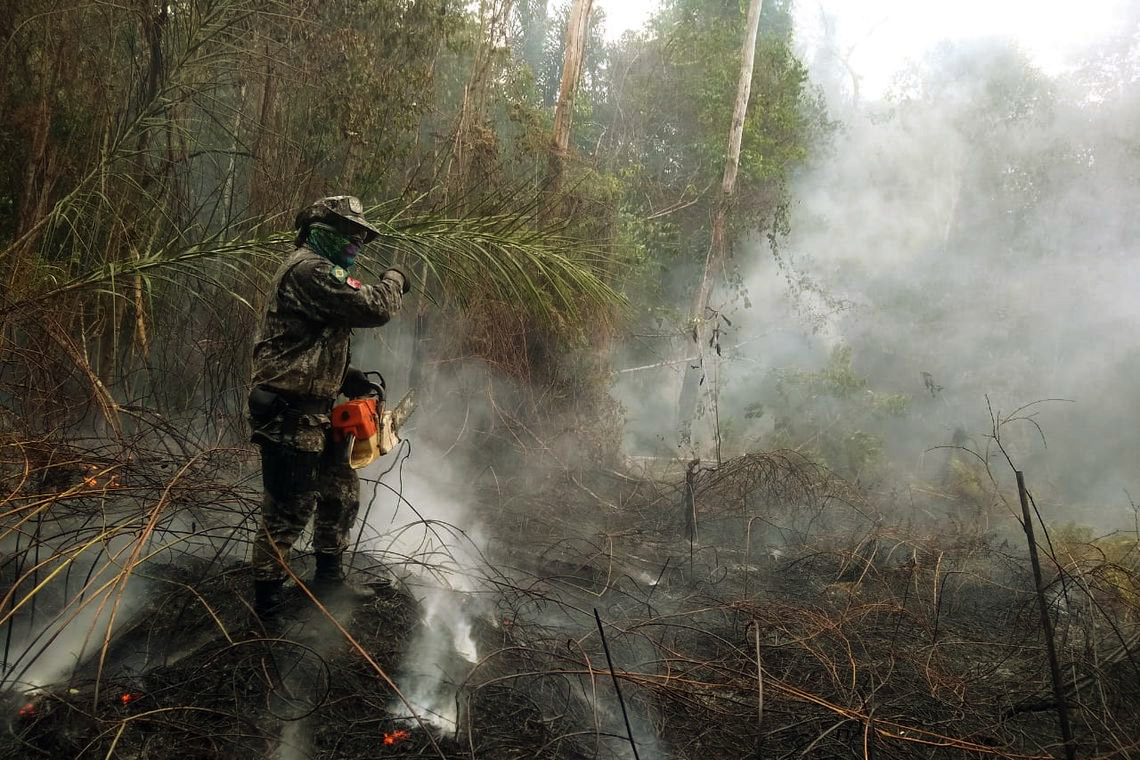 As the Amazon suffers from the collapse of the healthcare system during the Covid-19 pandemic, the people responsible for the deforestation are not quarantining. Images from the region’s increasing and astonishing deforestation, as well as those from the Cerrado region are circulating worldwide. In Europe, the discussion concerning Mercosul’s trade agreement with the European Union has been questioned, due to the possibility of approval of laws in Brazil, even amid the pandemic, favoring land ownership falsification and stimulating deforestation for the production of commodities such as meat, soy, and corn (i.e. Draft Bill 2,633/20).

Furthermore, the statement from the Brazilian Environment Minister, Ricardo Salles, saying that he wants to take advantage of the Covid-19 pandemic to “deregulate” the Brazilian environmental law is a warning sign.

Social movements, people’s organizations, and progressive parties in Brazil are expressing many concerns with Brazil’s environmental agenda and with the proposals implemented by Bolsonaro amidst the pandemic, which already adds up to more than 45 thousand victims in less than 3 months. Many activists and European consumers have been worrying about this scenario of environmental devastation, and are sympathizing with communities who suffer these threats in their territories.

The new reorganization of Brazil’s environmental policy in Bolsonaro’s government had the Ministry of the Environment as subject and target, at the same time. In its participation at the 2019 Conference of the Parties of the Climate Convention - COP 25 in Madrid, the Environment Minister Ricardo Salles defended that Brazil had already done too much for the climate and that he would need to access more resources from other countries’ debts, referring to the Green Climate Fund. The statement has come to be known as environmental blackmailing.

In 2020, his Ministry was reduced, losing the administration of public forests, for example, to the Ministry of Agriculture. Aside from the splitting of agendas, before 2019, the Ministry of the Environment suffered from the pressure of a short budget, destined for the activities of environmental monitoring.  It is important to remember that this is the Ministry that relies the most on official International Cooperation, having had investments for years, which have, for example, subsidized the National Plan Against Deforestation in the Amazon and, more recently, the implementation of the National System of Environmental Rural Register, a self-declaratory system for the registration of rural properties.

If on the one hand, the Environment Ministry makes room for handing over parts of environmental administration to the Ministry of Agriculture – headed by a Minister that represents the interests of “ruralists” (agrobusiness and big landowners) –, on the other hand, the environmental monitoring operations in the Amazon are under the command of the military since May 2020. Such was Bolsonaro’s priority, that the decision to initiate Operation Green Brazil 2 was taken amidst the pandemic, while big cities in the Amazon suffered from the collapse in their healthcare system.

The increasing role of military staff from the three Armed Forces in the federal government is a matter of concern since the beginning of Bolsonaro’s government. The number of military staff appointed to many government positions, in top administration posts, surpassed the proportion of military/civil existent in the governments of the Brazilian military dictatorship (1964-1985). It’s due to this reason that the process of militarization of environmental operations in the Amazon is a matter of great concern. In this article, we highlight 3 aspects regarding the main changes brought by this process:

1) Now, military staffs are the ones responsible for the operations. Previously, the army and the police already participated in operations in the forest, but the command was executed by environmental authorities – such as the Brazilian Institute for the Environment (Ibama) and the Chico Mendes Institute for Biodiversity Preservation (ICMBio).

3) The militarization of processes which were previously headed by agencies that provided transparent information regarding the execution and results from the operation makes it so that there isn’t transparency to the public, nor control from the civil Public Prosecutor’s Office – due to the Armed Forces being submitted to their own justice, the Military Justice. This opens up gaps to mask deforestation in areas destined to the production for global productive chains and Brazil-Europe, which won’t be verified without transparency and social control of the operations.

It is important to highlight that the process of militarization of environment monitoring is made through operations of Guarantee of Law and Order (Garantia da Lei e da Ordem - GLO). These operations must have an exceptional nature in democracies since they allow military staff to act with police power for a brief period until the re-establishment of normality. The same process was used in other recent situations, such as in police operations in favelas and during the FIFA 2014 World Cup. However, its use in environmental monitoring started in 2019.

Renewed for July 2020, the Environment GLO allows the use of resources for environment policies in military operations, that is, around US$ 2.3 million ($12 million Brazilian Reais) - are being spent by the military forces in a short period. Such spending, in fact, is bringing few results: the first mission of Operation Green Brazil, for instance, mobilized 97 agents, two helicopters, and tens of cars in an operation which ended without fines, prisons, or apprehensions. The mission indeed ignored Ibama’s nominations, which had suggested another target in the region, with evidence of illegality.

“Integrating for not handing over”

This increase in militarization has come as a response to the increasing national and, most importantly, international critiques regarding the deforestation in the Amazon. However, for Brazilians, especially those who live in the Amazon, militarization is a cause of concern, since it evokes the role of the Armed Forces in the military dictatorship, when the “integration” of the Amazon was proposed, through an authoritarian, violent process, without transparency. For the military, the Amazon is the most fragile territory for external attacks and occupies an important post in the defense of national sovereignty, being a geopolitical priority. Besides, statements from high-level military staff – not all of those participating in the government, but the ones active in the President’s networks of support – have been causing severe frictions in the harmony between the three powers, and brought threats directed at the Federal Supreme Court, in defense of Jair Bolsonaro’s government.

Therefore, it is important that those concerned with Brazil’s socio-environmental agenda, particularly in the Amazon, understand these new movements in the internal scenario since the prioritization of the defense of deforestation through these special operations are nothing but apparent: they’re not accompanied by new legislative and executive measures really capable of restraining deforestation, neither strengthening, in a transparent and participative way, existing public policies or governance structures. Besides, they reflect a bigger context of militarization in the Brazilian State, which should be monitored carefully.