Every quilombola woman is a resistance synonym 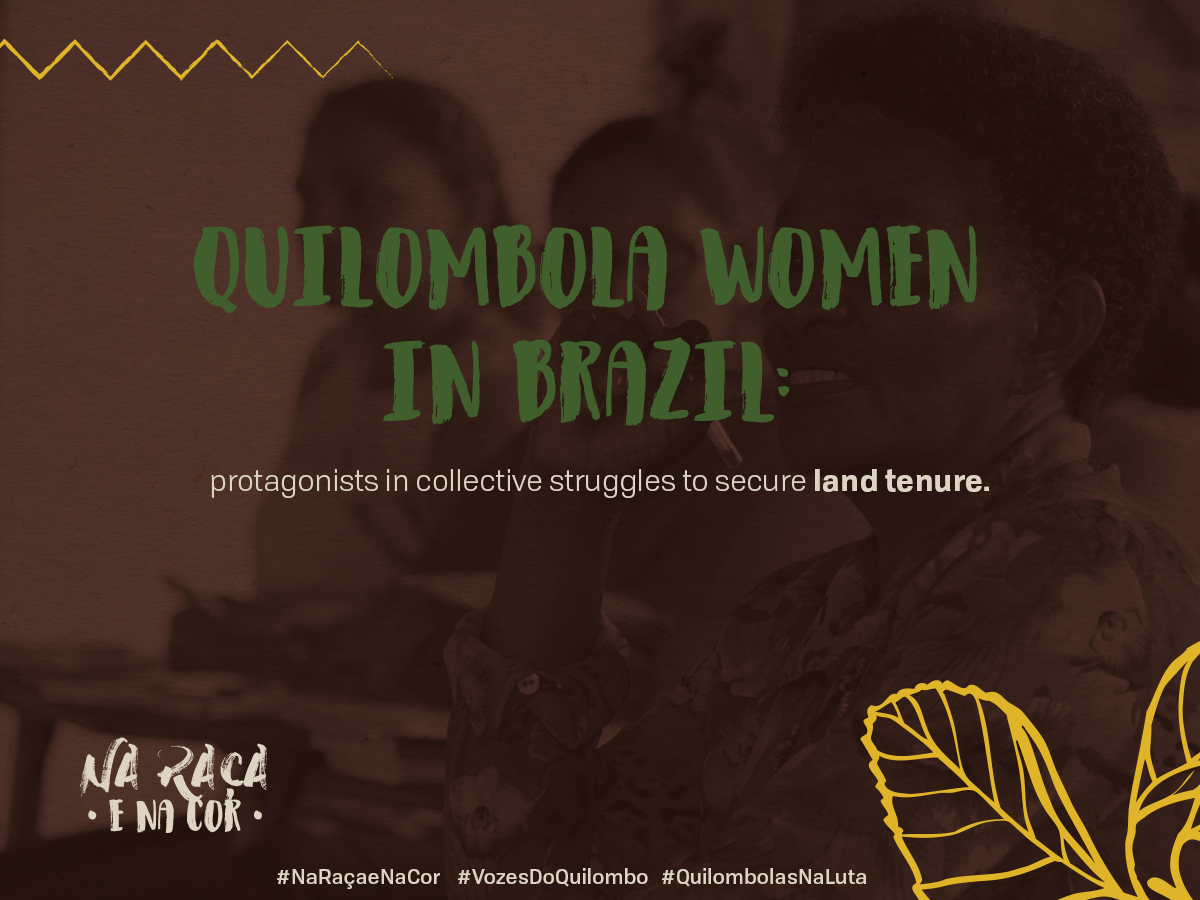 Aqualtune, Dandara dos Palmares, Luiza Mahin, Mariana Crioula and Tereza de Benguela are legitimate representatives of the struggle of black women for the freedom of their people. Not only for freedom, these women sought a society free of oppression and racism, fought against the sexist structures in force in different historical periods and stimulated a series of popular uprisings in Brazil.

The strength and inspiration represented by these women of the past, historical symbols of the resistance of the black woman, are found in the Aqualtunes, Dandaras, Luizas, Marianas and Terezas of the present, who have never stopped struggling to transform the reality that black women are submitted to.

In Santarém, a municipality in the western region of Pará, the role of quilombola women in the collective struggles of communities for securing access  guarantee to land and against human rights violations is an example of the struggle of Brazilian black women who, for centuries, have created resistance strategies in order to havingsee their lives, bodies and territories respected.

Organized through the Federação das Organizações Quilombolas de Santarém – FOQS – (Federation of Quilombola Organizations of Santarém), quilombola women are promoting a series of activities that aim at strengthening the articulation of women and reviving the culture and identity of traditional communities. Yet, in the various communities in the region, women organize themselves politically in other spaces, such as community associations and women’s groups.

Through the perspective of ethnic identity and gender, women advance in the debate about territorialities and strengthen the political processes of their communities. They stimulate new debates, incite women and young people to become involved in the quilombola movement and provoke state institutions public power through strategies aimed at guaranteeing access to basic rights such as health, education, and the so-called titling of their lands.

The voice and the turn of the quilombola women

By exercising a leadership role in the communities, the authority and influence of these women that actwork in a mostly male universe, the political sphere, reflectsprovokes reflections on their personal processes of empowermentdiscovery of leadership and on knowledge transmission, feminine collectivity and ancestry.

Very different from each other, from diverse socio-cultural contexts, the quilombola women of the region approach a common past, whose scars are fresh and vividly inscribed in their consciences. Granddaughters and great-grandchildren of people who were enslaved, the memory of the period that was the greatest horror in Brazilian history, is latent in the speeches of these women who know better than anyone the impact of the process of slavery in the life of the quilombolas.

Ivone Carvalho de Jesus, Mrs. Ivone, from the remaining Quilombo de Saracura community, is in the movement for 17 years and was the first woman in the presidentcy of FOQS. She tells us that she began her trajectorycareer in the movement after the First Black Roots Encounter, that took place in the Saracura community, where she participated as a cook and since then, despite the challenges she faced due to her limitation with reading, she has never left havingand she has exercised, several other functions.

Granddaughter of a woman who has been enslaved, she has no patience for those who underestimate the quilombola fight, stating that “slavery is long overdue” and responds categorically that “so it is this long time that we have to claim today.”

Currently, she is an adviser to FOQS, has daughters and children engagedinvolved in activities of the quilombola movement and integratesis part of the Saracura women’s group “Quilombo Girl”. On the organization of women, Dona Ivone stresses the importance of participation in meetings and believes that the greatest impediment for more women to become involved in the movement are husbands who, however often do not prevent them, do not offer help withsupport and do not share Child care and home activities so that women can participate.

“It is very good to participate in learning what is best for everyone and if more women start to participate, communities will move forward a lot. Because it’s not just men who fight, women do, too, so they have to organize themselves to be able to fight, ” she says.

Former president and current vice-president of FOQS, Ana Cleide da Cruz Vasconcelos, Cleide do quilombo Arapemã, is a singer, composer and is part of the group “Na raça e na cor (In race and color)”. She Eemphasizesing the as main achievements of the movement itsso far in representativeson in the Municipal Health Council and in the Coordination of Ethnic and Racial Education and Diversity, stressing the importance of and the implementation of schools in some communities, Cleide believes that it is essential to train and strengthen young people and children for the continuation of this job.

“Getting our black children inside the university was a struggle of ours and today we continue our struggle conquering the women”, affirms the singer who puts in verses the reality and the daily life of the quilombos, presenting the according to demands of the quilombola movement and the women through hertheir songs.

On the condition of women in the quilombola culture, Cleide believes that the stigma on the black woman is still very strong and harmful for quilombola women. In addition to domestic violence, Cleide says that many are hindered by husbands from participating in the movement’s activities. “There are many who are gradually loosening up, but there is still a lot to be done and the husbands are the ones responsible for putting an obstacle in it,” she says.

Although the Federal Constitution guarantees quilombola communities the fundamental right of access to their traditional territories, the reality faced is differente from that. The titling of their territories is the main demand of the quilombola movement, which for decades has been waiting for this recognition in order to have access to a series of other basic rights.

Without titling, many income-generating activities are compromised and communities are summarily attacked by landowners and grileiros of the region who enter their territories disrespecting and threatening their space and way of life. In addition to the struggle for land tenureguarantee, each quilombo presents its specificities and challenges related to them.

With many other battles ahead, the struggle of the quilombola women is broken up into several other daily challenges that accompany them. Violence against women, persistent in many communities in the region, and the elimination of racism are central to the struggle of the quilombolas of western Pará who,collectively together, continue the history of struggle and resistance of their ancestors and build a new trajectory of a project of collective emancipation, strong and also ancestral.

>> Check out Cleide singing “Negra nagô” during the women’s workshop held in the quilombo of Patos do Ituqui, on the last day of march 15: