No license for destruction: Cargill and its false solutions for the climate crisis 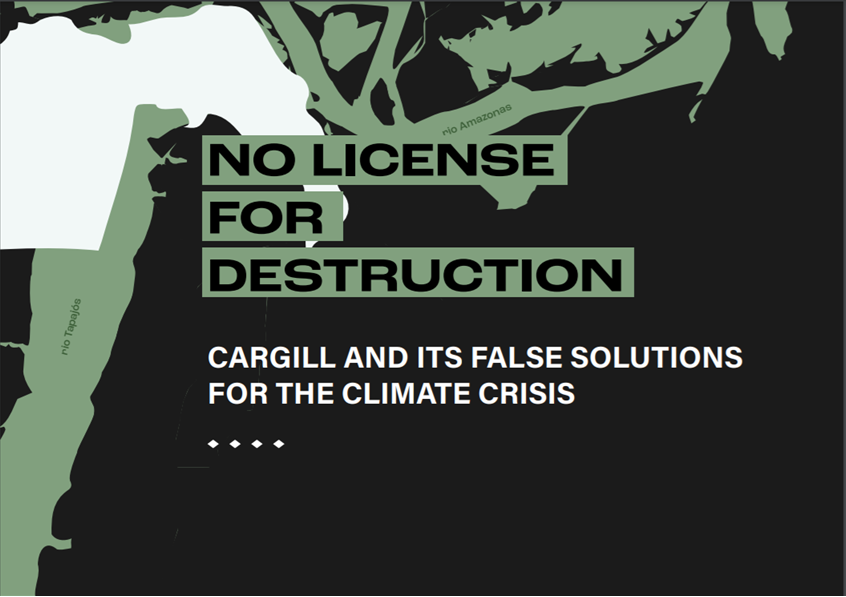 The climate crisis theme has been occupying a core space of debate in society due to the worldwide increased number of effects regarding climate change. For some decades the United Nations (UN) has been promoting the so-called Conference of the Parties – COP, a meeting gathering willing representatives from several countries, companies, and civil society organizations and institutions, in order to negotiate solutions and sign agreements to mitigate climate change, with special focus to reduce greenhouse gas emissions in the atmosphere.

In 2021, COP26 is taking place in Scotland, with the goal of finishing the set of rules that the Paris Agreement signed in 2015 is comprised of. The treaty contains measures to be adopted by signatory countries of the United Nations Framework Convention on Climate Change (UNFCCC) to restrict global warming and try to limit the Earth’s temperature increase to just 1.5ºC. However, COP26 is underway and it has been filled with several controversies.

Measures and proposals presented by the countries have been showing alternatives that are not very efficient, and which, actually, contribute to maintaining means of production that have high rates of greenhouse gas emissions. The discussion around mechanisms, such as carbon credit markets and forest offsets leave aside the real role that large industries and companies have in the climate crisis, and provide subsidies that allow them to continue to degrade the environment now as “green” and “sustainable”.

This green cover-up or greenwashing has also been the companies’ current strategy of choice – including at COP26 – to maintain their activities at this moment of expressive debates concerning the environment and climate.

To contribute to this climate debate and uncover how sustainability is being used by the capital and the market, we present, in this study, the strategies used by Cargill, a transnational corporation that is present in Brazil’s northern region, more specifically in the cities of Santarém and Itaituba, in the state of Pará.
Cargill is considered the company with the highest amount of private funding in the world, and in Brazil, it works in the agribusiness sector, which is considered by researchers, as well as civil society entities and organizations as one of the market sectors that causes most impacts against the natural environment and Brazilian traditional peoples and communities.

Over the course of several years of operation in the country, Cargill faces several denouncements made by social movements and civil society organizations regarding socio-environmental damages caused by its activities. As a result, the company has adopted the sustainability discourse as a strategy to conceal socio-environmental damages that occurred in the Brazilian territory.

This study presents how Cargill uses the climate debate to conceal its activities, demonstrating what are the propaganda and institutional mechanisms (plans, projects, and others) it employs to construct a sustainable corporate image.

The debate about the climate crisis, in addition to negotiating agreements to mitigate climate change, must acknowledge the role of indigenous peoples, quilombolas, as well as other traditional communities in protecting the environment. It must also question the political position of world leaders in face of industry and business activities that claim to be “sustainable”.