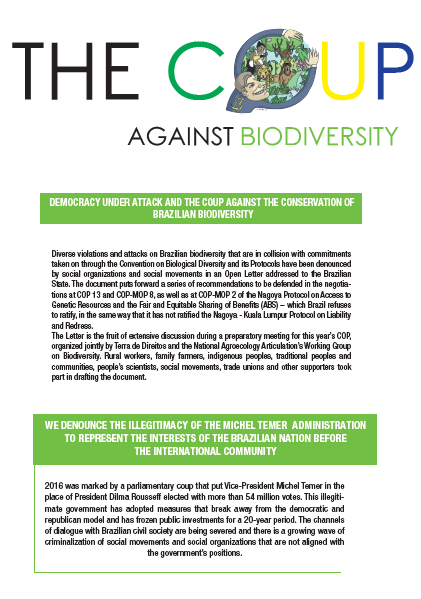 Diverse violations and attacks on Brazilian biodiversity that are in collision with commitments taken on through the Convention on Biological Diversity and its Protocols have been denounced by social organizations and social movements in an Open Letter addressed to the Brazilian State. The document puts forward a series of recommendations to be defended in the negotiations at COP 13 and COP-MOP 8, as well as at COP-MOP 2 of the Nagoya Protocol on Access to Genetic Resources and the Fair and Equitable Sharing of Benefits (ABS) – which Brazil refuses to ratify, in the same way that it has not ratified the Nagoya - Kuala Lumpur Protocol on Liability and Redress.

The Letter is the fruit of extensive discussion during a preparatory meeting for this year’s COP, organized jointly by Terra de Direitos and the National Agroecology Articulation’s Working Group on Biodiversity. Rural workers, family farmers, indigenous peoples, traditional peoples and communities, people’s scientists, social movements, trade unions and other supporters took part in drafting the document.