The Chico Mendes encampment is located at the São João Sugar Mill. The mill belongs to the Agropecuária Tiúma company, which is part of the Votorantim group. The mill is a 580 hectare rural property situated in São Lourenço da Mata (PE). In 2004, some 500 families of the Landless Rural Workers Movement (MST) occupied the land at São João Mill, given that many of these families had worked at the sugar mill, became unemployed when the company went bankrupt and never received the severance pay to which they were entitled.

The families were settled on October 14th 2008 by the National Institute of Colonization and Agrarian Reform (INCRA) in 7-hectare plots of land, totalling 55 families occupying approximately 313 ha., plus a further 100 ha. of legal reserve area. There is an itinerant school at the Chico Mendes settlement called Conde Pereira de Carneiro. The school has two classes, one for infants and the other for Youth and Adult Education. Production at the Chico Mendes settlement is diversified.

The case was marked by several episodes of violence and forced evictions against the rural workers. Terra de Direitos joined the diverse actors seeking to strengthen the struggle of the landless families and, in December 2006, Terra de Direitos, supported by social movements and other human rights defence organizations, began a large-scale campaign in favour of the rural worker families encamped at the São João Mill, having as its motto “Chico Mendes Encampment: Here Dignity is Produced”.

The conflict situation was widely publicized in the media. Posters and postcards were produced, addressed to the Votorantin Group, with the aim of putting pressure on the process and encouraging negotiation about the area between INCRA and the Votorantin Group. However, the Group was not inclined to negotiate and continued to take legal action in an attempt to get the families evicted and remain as the owner of the São João Mill.

Terra de Direitos accompanied the lawsuits relating to the case. This included working on the lawsuits for Property Repossession filed by the Votorantin Group aimed at evicting the landless families and working on lawsuits for the expropriation of the property for the purposes of agrarian reform. In addition to providing legal assistance, Terra de Direitos was present during emblematic situations such as visits made by authorities and mediation following the attempt to evict the families by force in 2006. 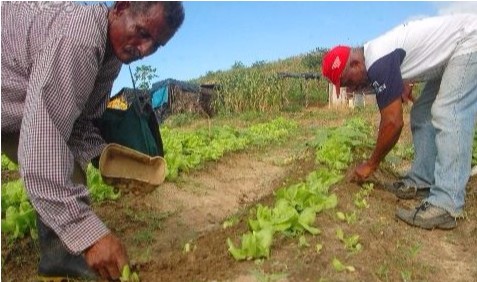