The so-called “Tapajós Hydroelectic Complex” would mean the building of seven power stations along two rivers in western Pará state, having a direct impact on traditional communities, including quilombolas, riverside dwellers, fishermen, extractivists and around 2,000 kilometres of indigenous territory, mostly of the Munduruku ethnic group.

The Complex project comprises five large hydroelectric power stations along the Tapajós and Jamanxin rivers. It is the new spearhead of the Accelerated Growth Plan in the Amazon and is linked to the IIRSA Plan (South American Regional Infrastructure Integration Initiative), which consists of the economic integration of South America, from the Atlantic to the Pacific, involving highways, waterways, railways, electricity and telecommunications to the benefit of large economic groups.

The project will result in the flooding of more than 200,000 hectares, involving conservation units such as the Amazon National Park, indigenous lands, riverside communities, colonization areas and public land in the process of land registry regularization. The affected areas are crossed by the BR-163 highway, this being one of the regions where deforestation has been most concentrated in recent years.
Terra de Direitos’ Santarém Office has been working since 2009 to defend the traditional communities that may be affected by the Complex, together with other organizations and social movements. 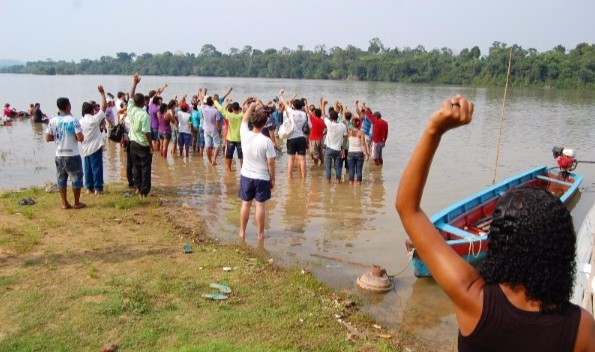