The Rio Maró Indingenous Land is located in Gleba Nova Olinda, in the municipality of Santarém in west Pará state.  It is an area of 42,373 hectares claimed by the Borari and Arapiun indigenous groups as a territory traditionally occupied by them. Today 240 people live on the Maró Indigenous Land which is characterized by conflicts with lumbermen and ranchers.

The process of self-identification as indigenous people gained force when the communities began to feel their way of life was being threatened by agribusiness and timber felling. In the year 2000, leaders of the Novo Lugar, Cachoeira do Maró and São José III villages sent a letter to the Federal Public Prosecutioner’s Office requesting help with the recognition of their territory.

More than nine years later, after having suffered direct conflicts with timber felling companies, in 2009 the indigenous peoples and other members of communities living at Gleba Nova Olinda I organized a blockade of the river Arapiuns, at Ponta do Pedrão sandspit, preventing the passage of two rafts that were transporting timber that had been illegally felled at the site. The episode brought great visibility to the struggle of the Borari and Arapiun peoples as well as that of neighbouring communities.

Notwithstanding, following this local leaders faced severe criminalization processes and in addition to being prosecuted they have also been subject to threats and aggression. The main threat to the fundamental human rights of the Maró indigenous communities is the advance of timber exploitation in the region. Social tensions will continue to increase until the area is recognized as an Indigenous Territory.
The National Foundation for Indigenous Peoples (FUNAI) only finished its Detailed Report on Identification and Delimitation of the land in 2010. During a meeting with the Justice Ministry in 2016, the news was given that the demarcation process was to return to FUNAI to be reviewed owing to it having been questioned in court. 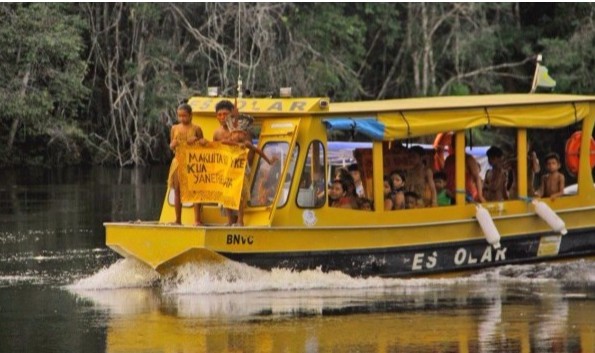