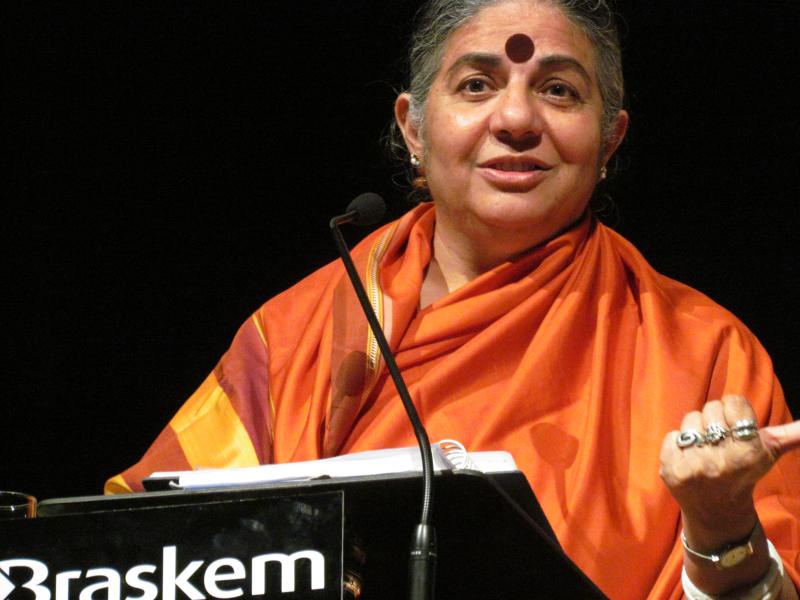 Let us all, in all our diversity, start articulating the Laws of Mother Earth from each of our particular cultures. Let us tell our stories, so that this richer story shapes the future and not the narrow pathetic story of those who only know how to make money at the cost of everyone, declared Vandana Shiva. This was the resulting objective of a conversation between Vandana Shiva and five other Latin American women activists in a conversation titled “Encuentro con Mujeres Latino Americanas”.

The video conference took place on Friday May 15, 2020 as Vandana Shiva addressed participants from all over Latin America.  The conversation, organized by the Argentinian organization Naturaleza de Derechos, Navdanya International, Bolivian organization Probioma, the Bolivian center for documentation and Information or CEDIB, Gwata and Desvío a la Raiz  featured questions from these five women activists over the political agenda behind pesticides and GMO seeds, the importance of indigenous knowledge and resistance, and how solidarity can be built even in our current pandemic times. Among the women panelists were: Miryam Gorban from Catedra de Soberanía Almimentaria in Argentina; Saturnina Almada from Paraguayan Organización de Mujeres Campesinas e Indígenas Conamuri; Naiara Bittencourt with Tierra de Derechos, Brazil; Erileide Domingues from the indigenous community Guyraroka in Pueblo Guaraní Kaiowa, Mato Grosso, Brazil.

The conversation began with Dr. Shiva explaining how the current story of the Coronavirus pandemic weaves into the longer story of agrotoxins and the destructions of the forests for expanded industrial agriculture. A story who has its fundamental origins in the colonial mentality of separation and domination of life. For example, Shiva references how over 17,000 square kilometers of Amazon Rainforest has been cleared over the last 11 years to make way for the planting of genetically modified soy. This mass planting of soy, Shiva reminds us, is not to feed the human population, but instead to serve as industrial inputs for biofuel and animal feed or processed food ingredients. Giving large agribusiness companies control over every level of the supply chain- from patented GM seed to industrially produced food.

This can only be done with the displacement of farmers, women and indigenous communities interweaving the story of domination over nature, to the threat toward Indigenous ways of life.  Erileide Domingues, at the end of the conversation, describes how her community has suffered health impacts due to pesticides being sprayed. A situation now being made worse by the coronavirus lockdown, despite their persistent complaints to the Brazilian government. She describes how the clearing of forests has also eliminated their natural medicine, delivering a two-fold punch in the debilitation of her community’s health.

This story exemplifies other important impact of this ecological destruction and reason for our current global health crisis- destruction of the forests leads to the releasing of new diseases, inevitably leading to new global epidemics. These two interconnected crises show us how this current production model breeds vicious cycles of disease, instead of health and wellbeing for all, remarks Shiva. Very clearly showing us how an indigenous, local and agroecological paradigm, which loves and protects the Earth in all of her diversity, is essential to preserve the health of every being.

All the while, with the whole world locked up, the panelists remind us of how the poison cartels and their government allies waste no time in passing new laws to impose genetically modified seeds and the industrial agricultural model they are tied to. This is currently the case in Bolivia, a  participant pointed out, where in the middle of the coronavirus lockdown and under the new interim president Jeanine Áñez, the National Committee of Biosecurity issued a new decree stating it was seeking to expand cultivations of genetically modified maize, sugar cane, cotton, wheat and soy for internal consumption and exportation. A direct threat to not only the heritage of Bolivian seed, but also to the identity of their people as Bolivia is the second place of origin for maize.

This is where we see the importance of indigenous seed and knowledge in breaking with the industrial agricultural model. Not only does growing native seed provide more climate resilience, as the seeds are ancestrally bred for resiliency, they also require healthier soils that end up taking up more carbon, higher amounts of biodiversity to thrive and are generally more nutritious. But perhaps the most important lesson indigenous organic seeds teach us, is the lesson of our interconnection. The seed is the bridge between humans and all other species, as it embodies all the past evolution, all the past relationships that made that seed, as well as all of the potential futures, remarks Vandana Shiva. We should grow native seed because they are us, and they are nature. They carry the memory of our ancestors and those are also the stories for the future as every time we tell our stories of resilience, strength, and Earth solidarity we are also seeding the future with a new narrative.

In the end, as Dr. Shiva ended, this encuentro become an example of horizontal organization serves to bring together different groups coming to the same conclusions and sharing common stories in order to create a new narrative in international solidarity. Fernando Cabaleiro of Naturaleza de Derechos echoed this in his closing statement. Expressing that, “these women are part of a movement that is not just ecological or environmental, but instead is a revolutionary movement that fights extractivism and the capitalist hegemony that justify government systems, or those who represent the big corporations. It is a movement that fights against inequalities, capital exploitation and accumulation that the governments try to promote.  It’s fundamental to listen to the knowledge of the people and their suffering. Women are the ones that know this better than anyone else.”