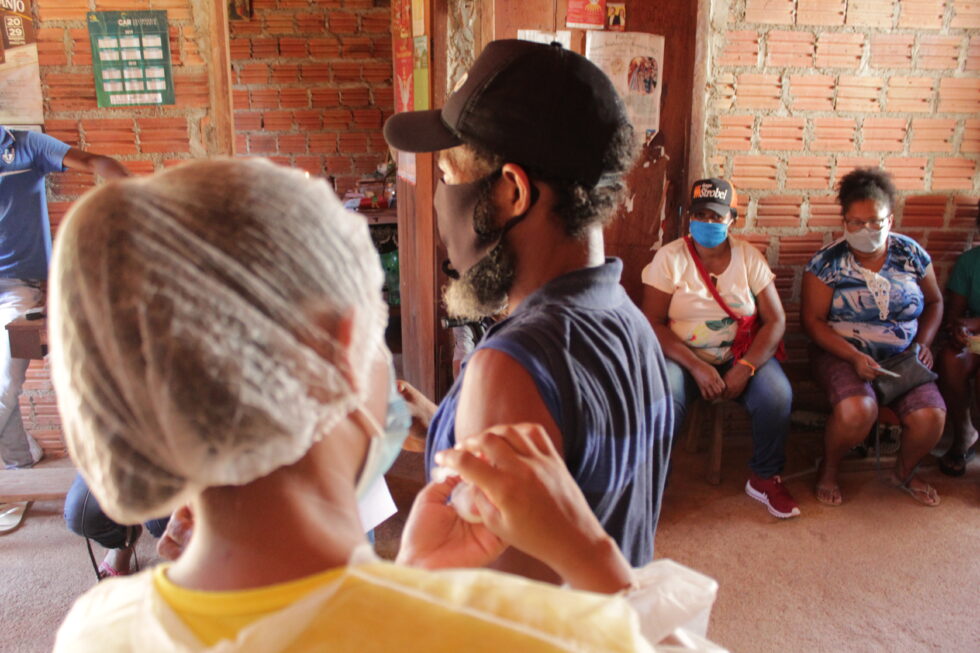 Considering the general scenario of the Brazilian State’s omission regarding the impacts of the Covid-19 pandemic over quilombos, the National Coordination for Articulation of Black Rural Quilombola Communities (Conaq), with the support of Terra de Direitos and Ecam Projetos Sociais, monitors how vaccination is being carried out in quilombos, as a priority group, all over the country.

Quilombolas were included as a priority group for the vaccination against Covid-19 in February 2021, through a Supreme Court’s decision. At that moment, the vaccination of the general population had just started and was advancing at baby steps in Brazil.

After roughly six months from that ruling, the survey on quilombola vaccinations demonstrates that the group has been facing a series of hardships to have their right ensured.

Until now, only 24% of the quilombola population is fully immunized with the application of the two needed doses or a single-shot vaccine, and 11% of the quilombolas consulted were not vaccinated. By way of comparison, at the beginning of August, more than 20% of the Brazilian population was already fully vaccinated. By analyzing states where the vaccination is more fast-paced, such as São Paulo, one may identify that more than 25% of the general population has received the two doses of the vaccine. In São Paulo’s capital, for example, the population over 25 years of age is already being vaccinated.

This survey has allowed us to identify repetitive problems that crop up again in different locations and which have been preventing quilombola’s broad access to the vaccine. Aside from the lack of information, the transference of responsibility from the government to quilombola leaderships, and the lack of structure, one might perceive how racism functions in these cases. The delay in the process of acknowledgment of quilombola territories by the Palmares Cultural Foundation – which is the first step in the ownership process – and the lack of land registration are also used as arguments to prevent quilombola people from accessing the right to vaccination.

This report marks a series of actions headed by Conaq in the confrontation of the Covid-19 pandemic and the vaccination monitoring in quilombos.

Study points out 94 racist speeches/statements by authorities in the 3 years of Bolsonaroâs administration
03/28/2022
The Brazilian Government systematically violates Convention 169, as denounced by organizations to the ILO
07/16/2021
Study on the social, and environmental impacts of Cargill in the TapajÃ³s is released by Terra de Direitos
06/28/2021
Due to Stateâs omission, Federal Supreme Court established protection measures for quilombos against Covid-19
02/25/2021
What are the threats behind the militarization of the fight against deforestation in Brazil?
06/26/2020