Study on the social, and environmental impacts of Cargill in the TapajÃ³s is released by Terra de Direitos

The unprecedented survey points out that, despite the failures to comply with the conditions established over the course of the 20 years of operation and the series of historical gaps in the Port’s Environmental Impact Study, Cargill’s licenses to operate are still being renewed.

Terra de Direitos releases the study “No license for destruction – Cargill and the violation of rights in the Tapajós (Santarém)”, which points out to a series of irregularities and disrespects towards the process of environmental licensing for the installation of Cargill’s Port, a multinational company founded in the United States that produces and processes food. The company has been operating a port terminal in Santarém, Pará, for almost 20 years, and heavily impacts the region’s traditional communities who joined forces to request compensations and redress from the Government of Pará due to the venture’s installation.

At this moment, when foreign eyes turn to Brazilian environmental politics, the company’s requested license renewal to Pará’s State Secretary of Environment and Sustainability (Secretaria de Estado de Meio Ambiente e Sustentabilidade do Pará – SEMAS) in August 2020 might undermine the local economy, in addition to causing well-known social and environmental impacts. The survey conducted by Terra de Direitos concludes that despite the non-compliance with the conditions of the Port’s Environmental Impact Study elaborated by the company with a series of gaps, licenses for Cargill operation continue to be renewed.

“Cargill proceeds without a valid operation license since November 22nd, 2020. We must guarantee that environmental bodies will not grant a new license before the adjustment of the Impact Studies, with the adequate inclusion of the Studies of Indigenous and Quilombola Components and the compensation for the damages caused so far. The realization of a true previous, free, and informed consultation of the affected indigenous, quilombola, and traditional communities is essential to guarantee the continuity of an environmental licensing process in accordance with the existing legislation and human rights principles”, asserted Pedro Martins, a legal advisor for Terra de Direitos.

Complaints – agribusiness advancement and the memory destruction of traditional peoples.
One of the main complaints brought up by the survey concerns the advancement of agribusiness in the region, connected to the soy production increase after Cargill’s arrival, which changed the processes of soil use and occupation. Having a local buyer such as Cargill boosted the migration of farmers, causing pressure for farming over forest areas in Santarém. Since the beginning of the company’s process of installation in the region, Santarém has lost an area of forests larger than 1 thousand km² - the equivalent to more than 100 thousand soccer fields. This figure is related to the accumulated deforestation between 2000 and 2018, according to the data from the National Institute for Space Research (Instituto Nacional de Pesquisas Espaciais – Inpe).

The highest amount of deforested area in the municipality was registered in 2008 – in that year, 3,084 hectares were deforested according to the data from Terrabrasilis/INPE. In 2019, 1,937 hectares were deforested in Santarém. The municipality of Belterra, which is almost four times geographically smaller and has most of its territory occupied by the Tapajós National Forest, has lost more than 158 km² of forests in 18 years, the equivalent to more than 15,800 soccer fields.

“With the destruction of the local vegetation, there’s an increase in the apparent temperature. Moreover, the port caused a loss of fishing area, invasion of exotic species land, and impacts on the quality of the fish, with a greater incidence of abnormities and less time for the product’s conservation”, he explained.

Land disputes also became a problem in the region. The arrival of soy agriculture in the municipalities of Belterra, Mojuí dos Campos, and Santarém contributed to a process of land valuation. A survey raised in the study indicates that, between 2000 and 2005, 90% of the areas around the BR-163 highway changed ownership, especially in the segment between Santarém and Belterra. The increase in land value was one of the factors that might have contributed to small farmers’ sale of properties, but it was not the only one: reports brought up by Santarém’s Rural Workers and Family Farmers Union (Sindicato dos Trabalhadores Rurais, Agricultores e Agricultoras Familiares de Santarém – STTR-) point out that, in great part, family farmers were pressured to abandon their lands. In this context, women are the most affected, driven from their land, which increases the food insecurity of the families. 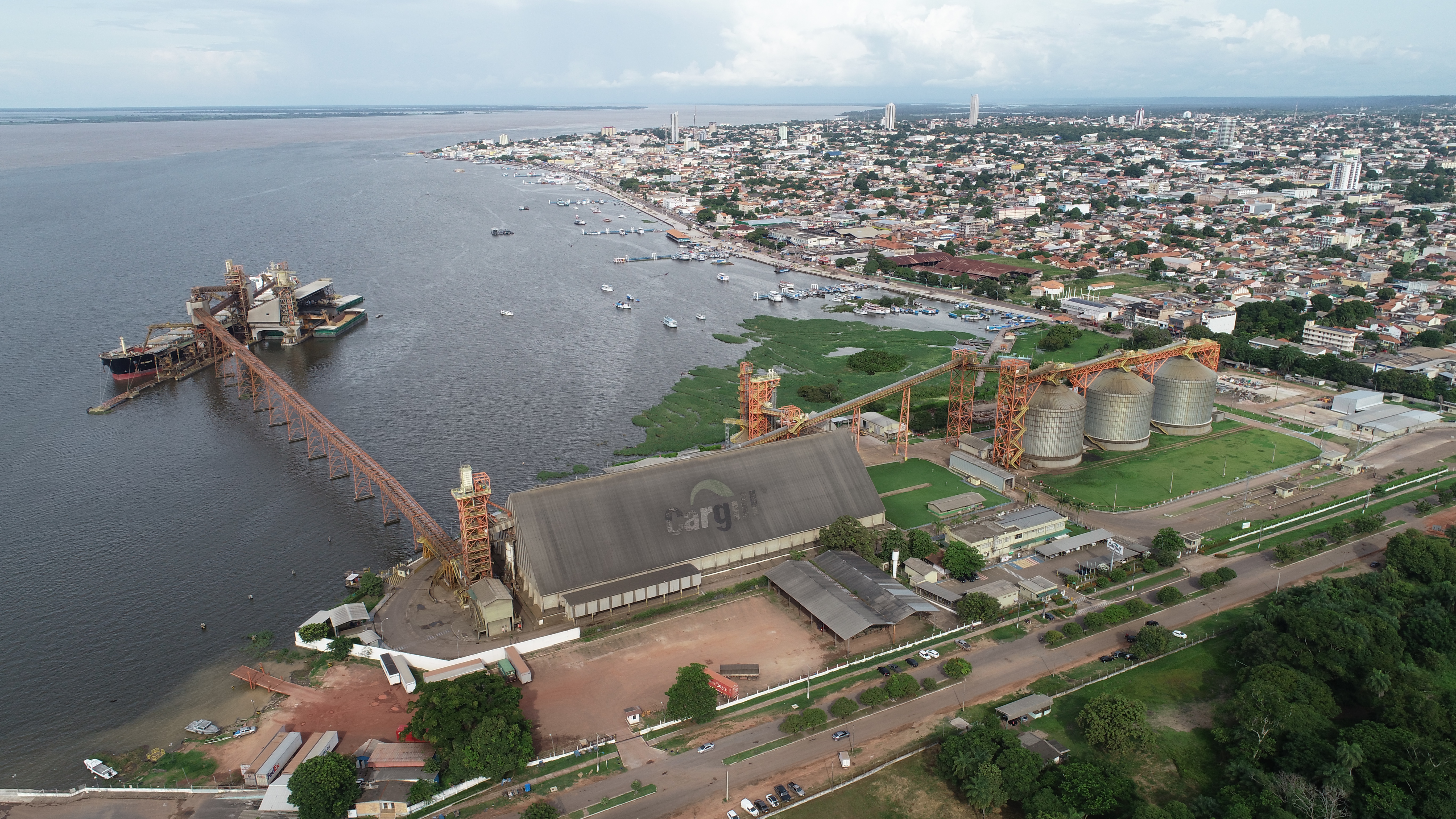 Another great impact pointed out by the region’s communities regarding Cargill’s facilities also has a direct relationship with agribusiness expansion. Due to the company’s arrival and the fostering of soy production, the communities – especially in the Santarém Plateau, between the municipalities of Santarém, Belterra, and Mojuí dos Campos – started to feel the effects of agrochemical application in the plantations, which are increasingly closer to urban areas and facilities such as schools, healthcare clinics, and hospitals. A master’s degree research on Sustainable Development presented at the University of Brasília in 2019 identified that at least one of the water bodies of the three cities in the Santarém Plateau is contaminated with, at least, one of the assessed active ingredients (agrochemicals’ main chemical substance). The application of agrochemicals has also been causing the mass extinction of the region’s native bees and other pollinators, which may further cause adverse effects.

The study from Terra de Direitos also brings up a series of complaints based on reports from the region’s peoples. With the installation of Cargill’s Port terminal, the inhabitants of Santarém had to leave one of the city’s main areas of urban leisure. The construction of silos for the storage of grains and a 580 meters dam brought the well-known Vera Paz Beach to an end. Moreover, the installation of the terminal’s structures represented the destruction of a part of the region’s largest archeological sites. Located between the neighborhoods of Laguinho and Mapiri, the Port’s Site holds vestiges of the territory’s pre-Columbian occupation of nearly 10 thousand years. Indigenous persons report disrespect towards their ancestry and a serious violation of the indigenous worldview.

“The absence of listening to traditional peoples means that the reality of the impacts suffered by villages and quilombos, as well as fishermen and family farmers, has been omitted. Over the course of the 22 years since the company’s arrival in the region, ethnic groups have not participated in the elaboration of the venture’s conditions and were excluded from any participation process, despite the series of legal landmarks that guarantee this right”, concluded Terra de Direitos’ legal advisor.

About Terra de Direitos
Terra de Direitos is an organization founded in Curitiba (PR), in 2002, and has been acting on situations of collective conflicts related to access to land and rural and urban territories in the Tapajós for 11 years.  The organization believes in popular sovereignty and supports the collective struggles of social movements, peoples, and communities for the recognition and safeguard of rights. It understands democracy and social justice as fundamental for a free, just, and inclusive society, especially in Brazil, which is the land of several peoples, cultures, and identities. It acts towards full justice access, claiming for a justice system capable of reflecting the diversity and plurality of Brazilian society. www. terradedireitos.org.br

Cinema of Resistance: documentary about flower pickers that struggle to defend traditional territories
09/16/2022
Study points out 94 racist speeches/statements by authorities in the 3 years of Bolsonaroâs administration
03/28/2022
Quilombola Vaccinometer
08/31/2021
The Brazilian Government systematically violates Convention 169, as denounced by organizations to the ILO
07/16/2021
Due to Stateâs omission, Federal Supreme Court established protection measures for quilombos against Covid-19
02/25/2021