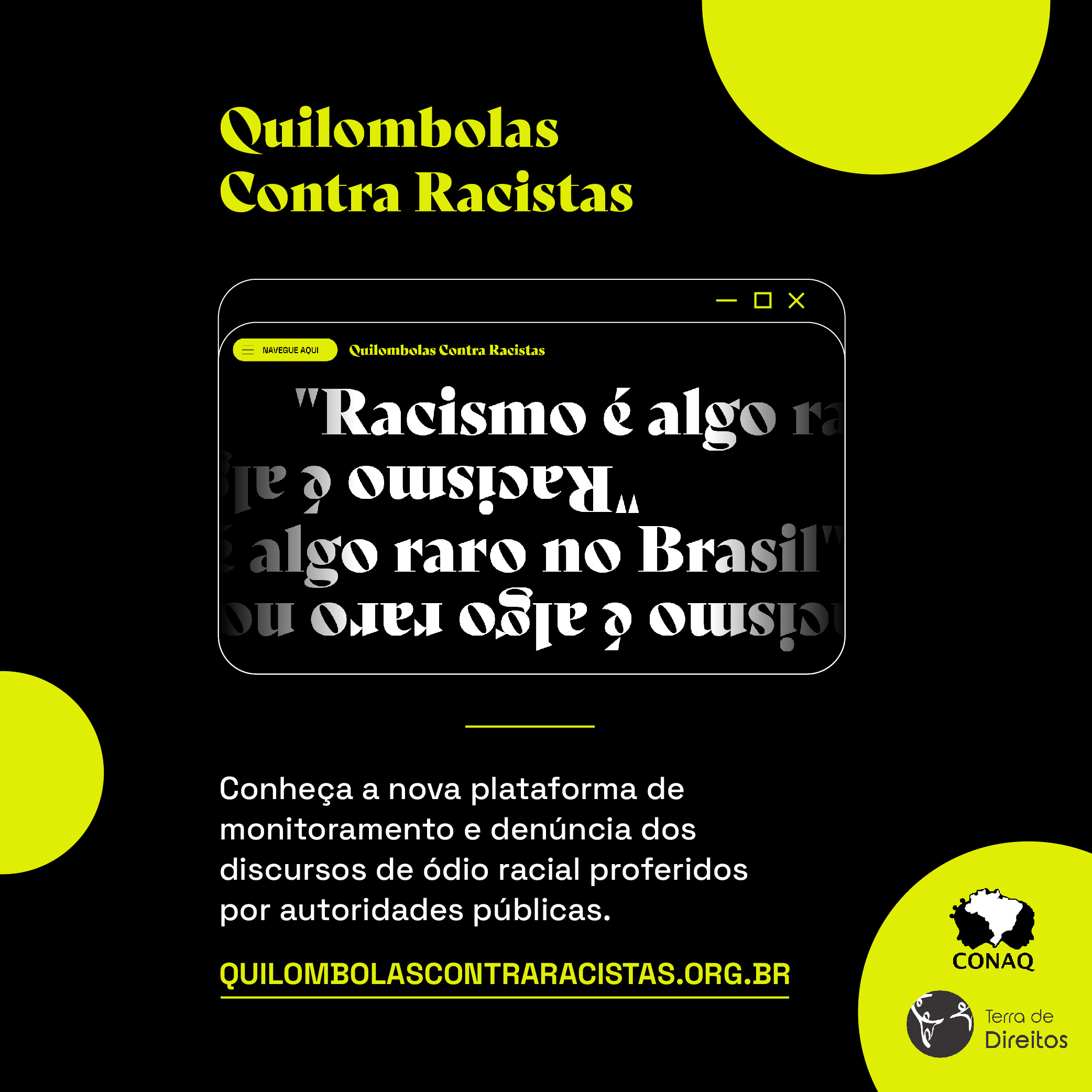 The survey "Quilombolas against Racists" (Quilombolas contra Racistas, in Portuguese) points out that since 2019 – at the beginning of Jair Bolsonaro’s administration (PL – political party) - 94 racist statements were made by authorities from the three spheres of government. The study analyzed cases disclosed by the press and social networks of racist speeches made by public authorities until December 31st, 2021. Among the positions with the highest number of occurrences are representatives of management and advisory positions of the federal government (ministers, secretaries, and presidents of autonomous government agencies). By December 2021, only one case had the perpetrator held accountable for racist speech. Sérgio Camargo, the current president of Palmares Cultural Foundation, and President Jair Bolsonaro lead the number of racist statements in the last three years, according to the survey.

Emblematic cases are included in the survey, such as that of the former Special Advisor for International Affairs of the Bolsonaro Government, Filipe Martins, who during a Senate session in March 2021 made a gesture seeking to depict the letters “W” and “P”, in reference to the expression “White Power”, and that of city councilor Gilvan da Federal (Patriota-ES) who, in November 2021 brought a bible, detergent, and a sponge to the Municipal Council to clean the space after the blessing of a priestess of Umbanda (an African-derived religion in Brazil).

According to Givânia Silva, a researcher and the co-founder of the National Coordination for the Articulation of Black Rural Quilombola Communities (Coordenação Nacional de Articulação das Comunidades Negras Rurais Quilombolas – Conaq, in Portuguese), the data represent an alarming reality about how racial hate speech has manifested itself in Brazil.

"These numbers represent constant practices of authoritarian, racist, and exclusionary governments that use public institutions to express their pathologies, such as racism and homophobia, among others. We can no longer allow such practices to go unpunished. Every citizen must speak up against these evils. Those who keep quiet collaborate and even finance practices like these", highlights the researcher.

Data from 2021
Overall in 2021, 36 racist statements were made by public authorities. Of this amount, 41% of the statements were aimed at reinforcing racist stereotypes - which is when the speeches are based on negative stereotypes, historically used to inferiorize people or justify violent processes such as chattel slavery. Compared to 2020, this type of hate speech increased by 33%, the year in which 15 cases were identified.

There soon followed the statements denying the existence of racism, as 25% of occurrences in 2021. Even in face of the decrease in the numbers of racist manifestations between 2020 and 2021 (-14%), all the months since the beginning of Jair Bolsonaro’s administration, in 2019, have recorded cases of public authorities who gave racist statements.

According to the coordinator of the Quilombola Program of Terra de Direitos, Vercilene Dias, "in addition to the harmful character of the authorities’ statements, racist practices have also been advancing the dismantling of public policies aimed at the country’s Black and quilombola populations, such as through the low levels of titling of quilombola lands and the decrease in resource for schools in quilombos".

The complete survey data will be disclosed this Tuesday, March 22 at 6 pm (BRT), on the Terra de Direitos and Conaq YouTube channels, through a virtual debate. The impacts of racist speech by public authorities will be discussed.

Low accountability
City Councilor Jonathas Gomes de Azevedo (PROS-BA) was the only public authority held accountable for his speech. On 08/30/2021, the councilor attacked state deputy Carlos Robson Rodrigues da Silva, popularly known as “Robinho” (PP) calling him “Canalha” (scoundrel), “Bandido” (thug), “Imoral” (unethical), “Picareta” (corrupt) and “Indecent in your social networks”. By court decision, Jonathas Gomes was forced to remove all his posts on social media with the exposed offenses under penalty of a fine of R$ 1,000.00 (BRL) per day and to pay the amount of 20 thousand BRL as compensation for moral damages.

According to the analysis of the aforementioned study, the low levels of verification and accountability of facts have been an additional motivator for the continuity of racist practices in speeches from Brazilian public authorities. Of the total number of occurrences in 2021, 33% of them had some request for verification of facts and/or accountability, either through the opening of an investigation, lawsuit, or administrative procedure against the authorities involved; and of these requests, only 1 of them had any kind of accountability.

About the Survey
The survey "Quilombolas contra Racistas" is an initiative by Terra de Direitos in partnership with the National Coordination for the Articulation of Black Rural Quilombola Communities (Conaq) designed in 2020 in order to measure the growth of the phenomenon of racist discourse as a tool adopted by public authorities. From that moment onwards, cases of racist speeches/statements made by public authorities are collected through news reports from the mainstream media, news published on the internet, and social media. This year, the survey receives a new update of the 2021 period.

Cinema of Resistance: documentary about flower pickers that struggle to defend traditional territories
09/16/2022
Quilombola Vaccinometer
08/31/2021
The Brazilian Government systematically violates Convention 169, as denounced by organizations to the ILO
07/16/2021
Study on the social, and environmental impacts of Cargill in the TapajÃ³s is released by Terra de Direitos
06/28/2021
Due to Stateâs omission, Federal Supreme Court established protection measures for quilombos against Covid-19
02/25/2021