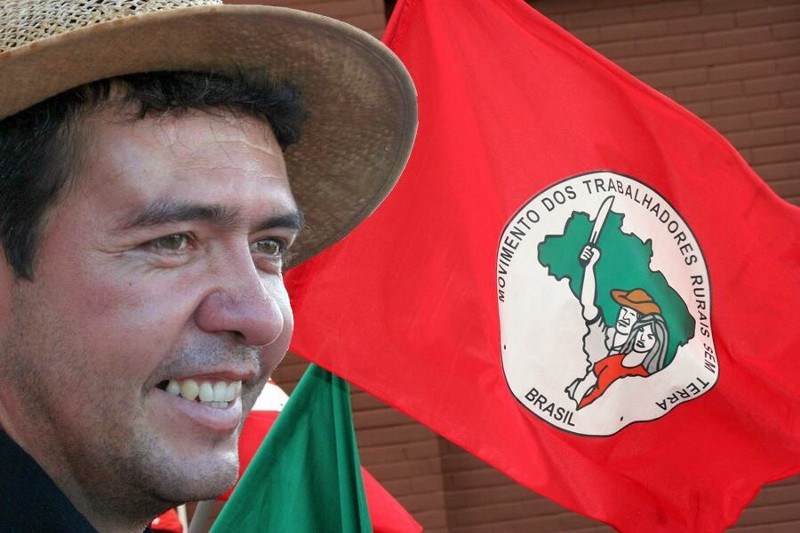 A Brazilian court on Thursday found the Swiss transnational corporation Syngenta guilty of the murder of the landless leader Valmir “Keno” Mota de Oliveira, and of the attempted murder of small farmer Isabel Nascimento de Souza. A panel of judges from Paraná state upheld a previous 2015 sentence, when a lower court found the company liable for the killing and ordered it to pay damages to the family of the victims.

Keno was a leader of the Landless Workers’ Movement (MST) in Paraná state and was shot dead on Oct. 21, 2007 at age 34. He was survived by his wife Íris Maracaípe Oliveira and three sons, Juan, Keno Jr., and Carlos Eduardo.

“Justice was served. Today Syngenta is [found] guilty. I am feeling very emotional right now,” said the small farmer’s widow when she heard about the conviction. “I thank God, because I never lost hope Syngenta would eventually be convicted of this tragedy. I would much rather have him here with me, but I am sure that, wherever he is, he is happy now,” she added.

The landless leader was murdered in 2007 on an illegal experimental farm owned by Syngenta in the city of Santa Tereza do Oeste, near the National Iguaçu Park. The area was being occupied by approximately 150 members of La Via Campesina, an international organization of peasant movements, including the MST, to expose the illegal research conducted by the pesticide and GMO giant in the facilities.

The activists were attacked by 40 armed agents who worked for NF Segurança, a private security company hired by Syngenta. Keno and Isabel were shot and she lost sight in her right eye. She was forced to kneel down to be executed, but she raised her head and was shot by the eye. Other three small farmers were wounded in the attack.

José Augusto Aniceto, the judge-rapporteur ruling on the appeal filed by the company to challenge the lower court’s 2015 decision, considered that Syngenta and the private security company signed a formal contract. “The employers are liable for the actions of their employees,” he pointed out.

While acknowledging this liability, most judges found the activists were also responsible for taking a risk when they occupied the area, and decided to reduce the amount the company will have to pay the families of the victims.

When casting his vote, judge Wellington Emanuel Coimbra de Moura disagreed and found the company completely liable for the crime. Moura argued the private security company NF Segurança learned that there were activists from La Via Campesina occupying the area hours before brutally attacking them, as they did not “pay them a cordial visit,” he pointed out. “The company took action without seeking legal authorities.”

The court upheld the 2015 decision of the lower court, when judge Pedro Ivo Moreiro condemned Syngenta’s attack. “While trespassing is reprehensible and illegitimate, it is not the case to act on one’s own and impose death penalty on occupiers, but to seek legal means to solve the conflict. After all, in the legal system, taking arbitrary actions for personal reasons is a crime,” he said.

The investigation on the liability of NF’s mercenaries, the company’s owner, Nerci de Freitas, and the big landowner Alessandro Meneghel was shelved in 2017. According to the judge at the time, the court could not convict the defendants because the crime had happened 10 years prior, so they could not be held criminally liable.

A victory for social movements

The case provoked major backlash in Brazil and the world. In 2008, members of La Via Campesina protested against Keno’s death outside Syngenta’s headquarters in Switzerland. That same year, the Swiss ambassador Rudolf Bärfuss apologized to the small farmer’s widow in the name of his country’s government.

A lawyer in the case, Manoel Caetano Ferreira Filho said yesterday’s decision was a great victory for social movements, as it acknowledges Syngenta’s liability. “I think it’s important that, being such a big company, the court’s decision was in favor of the weaker parties, which are the victims of the violence,” he pointed out.

Celso Ribeiro Barbosa, a member of the MST’s state coordination and La Via Campesina, said the decision is huge, as it proves Syngenta employs armed militia men. “We know that’s not going to bring our comrade back, but I think it repairs some damage regarding his [Keno’s] family and Isabel, who were the most impacted. This is why we are feeling very contented, it’s a victory for our class. It lifts our spirit to keep fighting,” said Barbosa, who lives in the Sepé Tiaraju settlement in Santa Tereza do Oeste.

A lawyer working with Terra de Direitos to support people’s movements, Fernando Prioste worked on the case and said the conviction of the company is a very big decision in a moment when there is a conservative wave gaining momentum in the country, when “the president-elect threatens to arm big farmers against social movements.” “The court decided, and it couldn’t be otherwise, that an armed attack by a militia group is illegal. And who acts with violence and intolerance should answer for that,” he pointed out.

In March 2006, the Brazilian Institute of the Environment and Renewable Natural Resources (IBAMA) notified and fined Syngenta R$1 million (roughly US$250,000) for growing genetically modified soybean near the Iguaçu Park, in the city of Santa Tereza do Oeste, after the organization Terra de Direitos reported the issue to the authorities.

In December that same year, less than two months after the crime, a court in Paraná ruled that Syngenta’s research conducted near the National Iguaçu Park was illegal. Since 2009, the area where Keno was murdered houses the 123-hectare Valmir Mota de Oliveira Agroecological Research Center, run by the Environmental Institute of Paraná (IAPAR).

Due to Stateâs omission, Federal Supreme Court established protection measures for quilombos against Covid-19
02/25/2021
What are the threats behind the militarization of the fight against deforestation in Brazil?
06/26/2020
What really happens in the Amazon Forest
06/02/2020
Who is favored by Bolsonaroâs responses to the fires?
06/02/2020
The âwin-winâ of companies with the financialization of nature
06/02/2020