The Brazilian Government systematically violates Convention 169, as denounced by organizations to the ILO

The milestone of protection of traditional peoples has been violated by the country. The late submission of the government’s responses to inquiries from international agencies and organizations prevents manifestation from the Experts Committee. 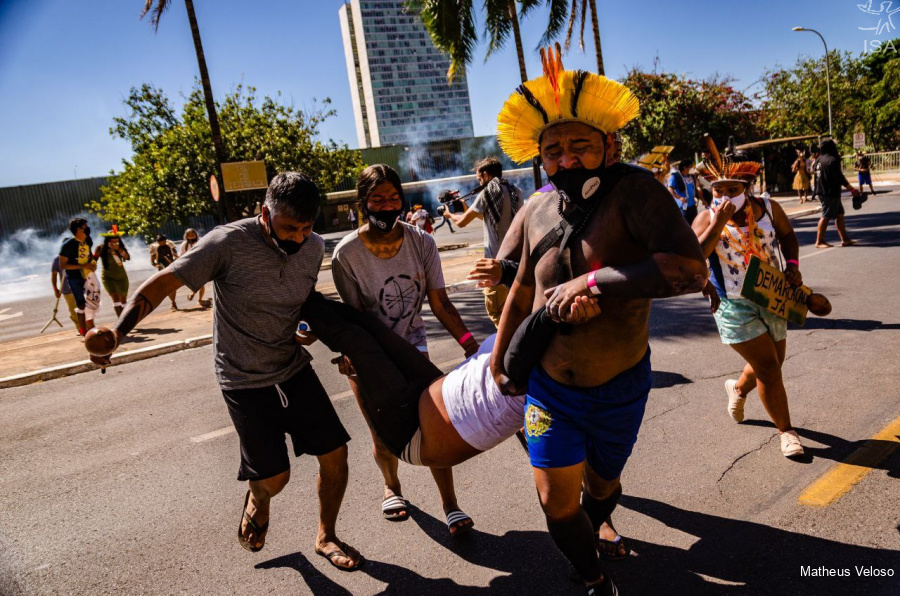 Brazil has been systematically violating Convention 169 of the International Labour Organization (ILO), as denounced by social organizations in a report submitted to the international agency. In the report elaborated by the National Coordination for Articulation of Black Rural Quilombola Communities (Coordenação Nacional de Articulação das Comunidades Negras Rurais Quilombolas – Conaq), the Brazilian Articulation of Indigenous Peoples (Articulação dos Povos Indígenas do Brasil – Apib), with the support of Terra de Direitos and the Unified Workers’ Central (Central Única dos Trabalhadores – CUT), a group of actions by the Brazilian State violating the main international legal instrument that protects the rights of indigenous, quilombola and other peoples and traditional communities is listed.

In addition to a long description of the Brazilian State’s actions relating to the period of 2019 and 2020 that violate the rights to self-determination, participation in the decisions that affect their ways of life and ownership of their traditional territories, among others – determinations present in Convention 169 –, the report highlights how the State’s omission in the protection of indigenous, quilombola, and other traditional peoples in face of Covid-19 have been particularly violating the rights of these traditional peoples, exposing them to a context of even greater vulnerability to the pandemic and its effects.

It is in this context that the actions filed by the same organizations in the Federal Supreme Court (Supremo Tribunal Federal – STF), in 2020, are inscribed. In face of the Brazilian State’s negligence in implementing specific actions for indigenous and quilombola peoples to confront the serious epidemiological crisis already installed in the country, Apib and Conaq, with the support of several organizations, filed – each organization – a Claim of Non-Compliance with a Fundamental Precept (Arguição de Descumprimento de Preceito Fundamental – ADPF). In the rulings of both actions, the justices of the Supreme Court recognized the government’s omission and determined that the Brazilian State must urgently develop and implement plans to fight the pandemic that are directed at the indigenous people and the quilombola population, as well as include these groups among those prioritized for vaccination in the National Immunization Program. Several months after these decisions from the Federal Supreme Court, Conaq, Apib, and other organizations have repeatedly denounced the weaknesses of the implemented measures.

Essential in guaranteeing the rights of traditional, quilombola, and indigenous peoples in Brazil, Convention 169 has guided the parameters for several Brazilian norms and public policies since the ratification of the Convention by the country, in 2003 – such as in the structuring of healthcare and educational programs directed at indigenous peoples. Even after more than 15 years that the norm is in force in the national territory, before the pandemic, Brazil was already violating the Convention, as pointed out by the organizations. They underline that the denouncement’s urgency at this moment, however, is due to the intensification of violations in the last three years and due to the fact that the rights already assured have suffered significant retractions, especially during Bolsonaro’s government.

As highlighted by Terra de Direitos legal advisor, Maira Moreira, “one of the most fundamental instruments in affirming the rights of indigenous, quilombola, and other traditional peoples and communities is being successively and repeatedly violated by the Brazilian State, producing a situation of genocide of these peoples and communities, a gradual and lingering genocide in which all of their material, cultural, and social conditions are undermined and the existence of these peoples and communities are put at risk”. Eloy Terena, Apib’s lawyer, reiterates that “it [the Convention] was already being violated but in the pandemic context this violation was aggravated”. 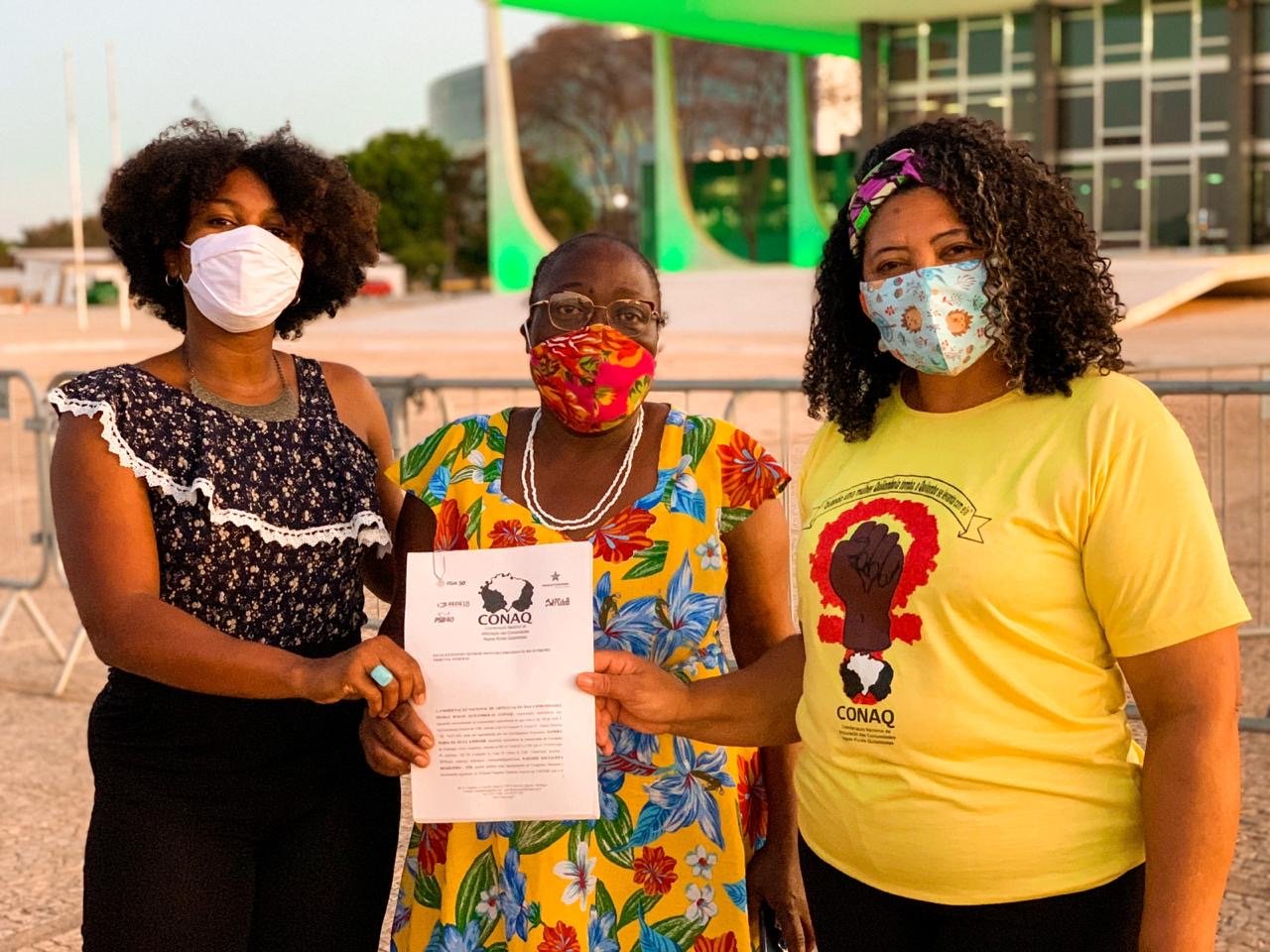 Late governmental information
By ratifying the ILO Convention, the country started to have the duty of submitting regular reports on the measures adopted for its implementation. Delivered within the regular period for analysis by the Committee of Experts – a group of 20 jurists from different nationalities –, the documents must also contain answers to the information requested by the agencies and organizations of workers of the respective country. After the analysis of the information by the technical group, the Committee can issue information or direct requests for new information – and later react to feedbacks.

“The submission of our report to the ILO Committee of Experts on the Application of Conventions is part of the entity’s system of Regular Supervision of Standards. Through our comments on the Brazilian State’s application of Convention 169, we exposed all of the violations committed by the government to the international community”, points out the legal advisor of the Unified Workers’ Union (CUT), Fábio Bon.

In a report released in February of this year, the ILO Committee of Experts had to restrict itself to the republishing of the comments related to Brazil that were made in 2019. This is because the Government’s response to the questions asked by the organizations and already pointed out by the experts two years ago was issued too late for consideration by the Committee at its current session.

The late submission – and the impossibility of analysis of the Committee’s responses – impacts both the agency and society’s monitoring activities on Brazil’s compliance to the Convention. However, it is possible to infer that the violations – already reported in previous documents – were even more exacerbated in recent Brazilian history, since the federal government has been shown to be openly opposed to traditional peoples and communities.

No centimeter
The period for registration of Brazil’s violations to Convention 169 submitted to the ILO coincides with Jair Bolsonaro’s (no political party) administration. As an open opponent of the rights of traditional peoples and communities, the President has already stated that in his government “there would be no centimeter demarcated for indigenous or quilombola reserves”. In other words, on the one hand, he signaled a great opening for the exploration of indigenous lands by affirming that “where there’s an indigenous land, there’s wealth underneath. We have to change this”. On the other hand, he made racist statements when addressing the quilombola population when he said that “the thinnest afro-descendant person there weighed seven arrobas. They’re useless. I don’t even think they’re good breeders anymore”.

It is not only the President’s statement that goes hand in hand with the denial and violation of rights of these populations but the dismantling of indigenous and quilombola policies established by the federal government as well. One of the most symbolic examples was the administrative reform at the beginning of the new administration.

Through Provisional Decree 870/2019, the agencies responsible for quilombola and indigenous policies were relocated to political agendas under the command of leaders related to agribusiness. The National Institute for Colonization and Agrarian Reform (Instituto Nacional de Colonização e Reforma Agrária – Incra) – the government’s agency responsible for territorial and quilombola rights – was relocated from the Civil Office of the Presidency of the Republic to the Ministry of Agriculture, whose agenda is managed by the ruralist Tereza Cristina (PSL). The National Indigenous Foundation (Fundação Nacional do Índio – Funai) and the role of demarcating indigenous lands were also transferred from the Ministry of Justice to the Ministry of Women, Family and Human Rights (Ministério da Mulher, da Família e dos Direitos Humanos – MDH). Funai’s new arrangement and demarcation role was only reversed by a decision from the National Congress. However, Incra remains under the auspices of the Ministry of Agriculture.

As a basic right, the protection and collective ownership of traditional territories is one of the greatest bottlenecks in the framework of violations. As a constitutional guarantee enshrined in several articles of Convention 169, the traditional peoples’ right to land in Brazil comes up against the federal administration’s omission, expiring budget, and market advancements over those areas.

The scenario of quilombola land ownership is even more fragile – over a little more than 30 years since the 1988 Constitution was approved, only 181 quilombola lands were titled (among state and federal titles), out of which 47 were only partial titles. Even though Incra's data were not updated since January 2019, the lack of budget in the last few years for the titling of quilombola lands shows what Incra fails to report: according to the Technical Note presented by the Institute for Socio-Economic Studies (Instituto de Estudos Socioeconômicos – INESC), since 2017 there are no budget resources for land regularization, and Brazil has only titled 7% of those areas.

“We are sure that all of the rights of indigenous, quilombola, and traditional peoples are linked to their territories. There is no way to protect the communities and guarantee health protection without speaking about territorial rights. Hence, it involves the demarcation of every indigenous land, the regularization of quilombola territories, and the protection of those areas that are already demarcated”, highlights the legal advisor for Terra de Direitos and Conaq, Vercilene Dias.

In the list of attacks on traditional territories, there is also the incursion of land invaders, miners, gold prospectors, and ruralists. In 2020, out of the 81,225 families that were victims of invasions in their territories, 58,327 were indigenous families, according to a survey from the Pastoral Land Commission (Comissão Pastoral da Terra – CPT). “The territories were completely at the mercy of these invaders. Their presence alone is already a violation of the exclusive use by indigenous peoples of their territories, but amidst this pandemic, the illegal invasions become a vector for spreading the disease”, stresses Eloy.

The document submitted by the organizations to the ILO also highlights the violation of the peoples’ right to self-determination, the attacks against policies for these peoples, such as the extinction of the Secretariat of Continued Education, Literacy and Inclusion (Secretaria de Educação Continuada, Alfabetização, Diversidade e Inclusão – Secadi), among other violations. See table.

Legislative attacks
Not only has the Executive Branch been carrying out continuous actions for the dismantling of the structures and actions linked to quilombola and indigenous people, but the federal legislative branch has been imposing an unfavorable agenda on these peoples. The most expressive representative bench in Congress, the congressmen linked to the Parliamentary Agriculture Front – a lobby supported by agribusiness associations and companies – count for 32 of the 81 seats in the Senate. In the Deputy’s Chamber, the 225 deputies affiliated to the Front represent 44% of the total votes (513) of the whole legislative house.

With this majority representation and no correspondence to the Brazilian population composition, the ruralists impose an agenda that enables the market’s incursion in the territories. A particular example is Draft Bill 490/2007. The Draft Bill threatens the demarcation of indigenous lands and opens the doors of these territories for agribusiness ventures, hydroelectric plants, mining, road, and gold prospecting. In a scenario of intense police violence against indigenous people in the surrounding area of the Chamber of Deputies and the lack of dialogue with those who will be most affected by this measure, the Draft Bill was approved by the Commission of Constitution and Justice (Comissão de Constituição e Justiça – CCJ) in the Chamber of Deputies on June 23. All of this amidst the pandemic.

On the other hand, the Draft Legislative Decree (Projeto de Decreto Legislativo – PDL) No. 177/2021 seeks to directly violate Convention 169. Authored by the federal deputy and member of the FPA, Alceu Moreira (MDB-RS), the draft bill issued in April of this year seeks to authorize the President to denounce ILO Convention 169. In other words, if approved, the Legislative Decree would allow Bolsonaro to remove Brazil from the Convention, a procedure called “denouncement” that represents an enormous setback to the already conquered rights. The legislative matter was distributed to commissions.

Cinema of Resistance: documentary about flower pickers that struggle to defend traditional territories
09/16/2022
Study points out 94 racist speeches/statements by authorities in the 3 years of Bolsonaroâs administration
03/28/2022
Quilombola Vaccinometer
08/31/2021
Study on the social, and environmental impacts of Cargill in the TapajÃ³s is released by Terra de Direitos
06/28/2021
Due to Stateâs omission, Federal Supreme Court established protection measures for quilombos against Covid-19
02/25/2021