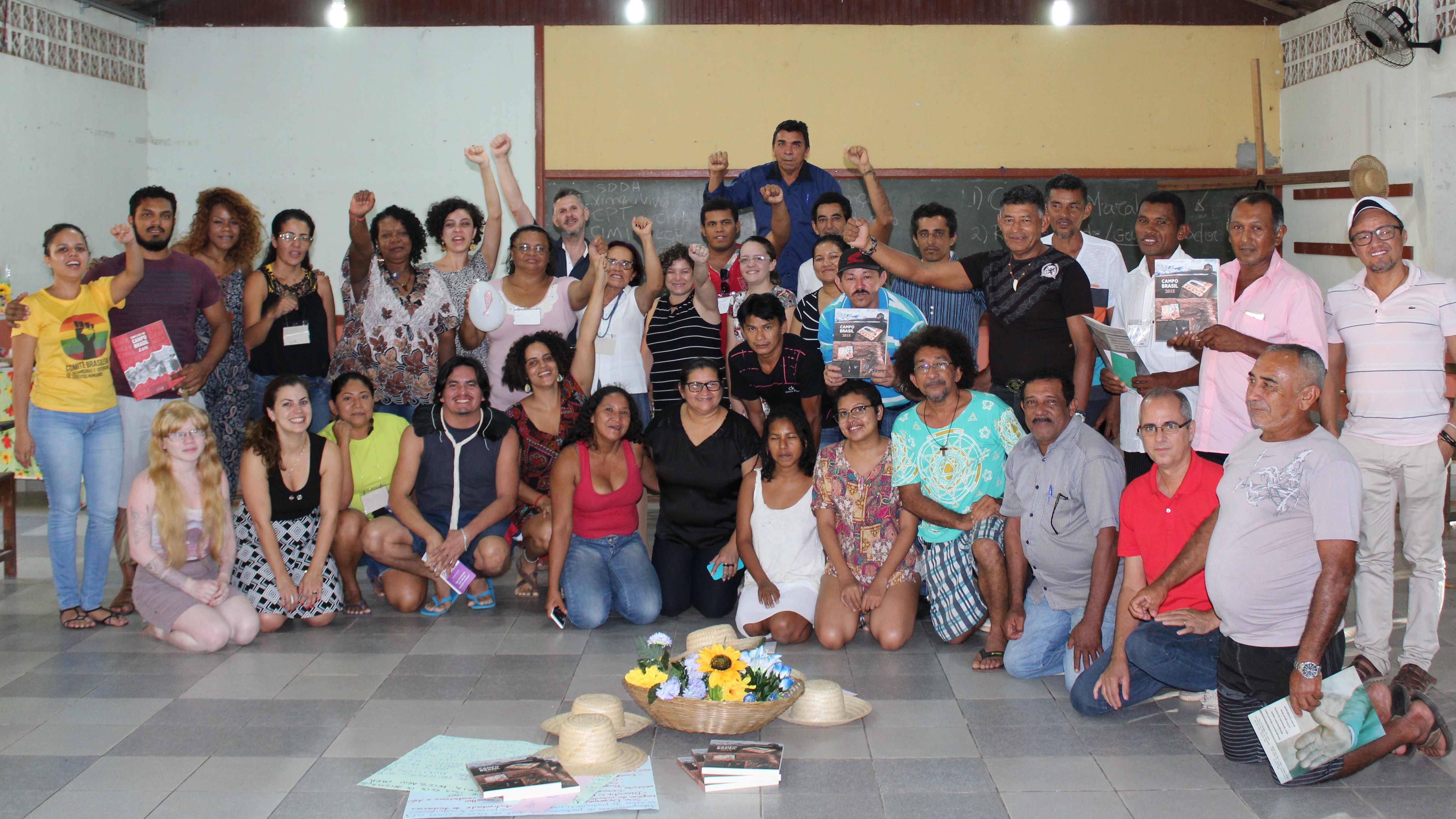 With the aim of strengthening local protection networks, the Brazilian Human Rights Defenders Committee held a workshop on Tuesday and Wednesday (3 and 4/7) in Marabá (PA) for human rights defenders from 22 entities and social movements in Pará.

During the workshop issues were debated and proposed such as the need for initiatives relating to protection programmes for defenders, victims and witnesses in the state, the need for self-protection activities to be undertaken and the production of a protection guide, among other actions.

At the end of the workshop the Pará Human Rights Defenders Network was officially created and will be responsible for carrying out the activities proposed. An open letter written by the workshop participants was also published (see below). During another event held after the workshop (full coverage of the event here) on Wednesday night (4), the launch took place of the dossier entitled  “Vidas em luta: criminalização e violência contra defensoras e defensores de direitos humanos human rights defenders no Brasil” (Lives in Struggles: criminalization and violence against human rights defenders in Brazil), the “Caderno de Conflitos no Campo Brasil 2016” (Report on Rural Conflicts – Brazil 2016) produced by Comissão Pastoral da Terra (CPT), as well as the Brazilian Human Rights Defenders Committee website.

In December 2016, the Pará state government introduced its Human Rights Defenders Programme, with the aim of adopting protection and assistance measures for human rights defenders who receive death threats because of the work they do.

During the workshop the participants complained that although it has been sanctioned, the Programme protocol has been drafted without the participation of civil society organizations. They also stated that it is fundamental for discussions to recommence with civil society representatives from the Pará state regions regarding the drafting of the policy. “Only we know the violence that has been perpetrated against our struggles and our respective needs for protection. It is also essential that the Programme for the Protection of Victims and Witnesses be strengthened in Pará state”, the organizations stated in the document produced at the end of the workshop.

The document also recalls that the state of Pará has historically committed atrocities against those who fight for the people and that in 2017 alone 18 people have already been murdered because of their political work.

Below is the open letter produced at the end of the workshop.

Open letter of the human rights defenders meeting in Marabá

We, rural and urban social movements, indigenous peoples, quilombolas, traditional communities, civil society organizations, women’s movements, public interest lawyers from diverse regions of the state of Pará, met in the city of Marabá on July 3rd and 4th to organize our response in the face of this serious scenario of violence.

Our state has historically committed atrocities against those who fight for the people. In 2017, eighteen of our comrades have already been murdered because of what they fought for. The Pau D´Arco massacre, headed by the state’s Military Police and landowners, demonstrates that we are going through in hard times in the struggle for agrarian reform in Brazil. It is inadmissible that the state of Pará, through its police forces, has executed ten landless workers without any remorse. The pain of this massacre is alive in all of us and we shall never forget this brutality committed against the struggle of the landless.

Historically, the southern, south-eastern and south-western regions of Pará concentrate the state’s worst rural conflicts. In 2016 alone six people were murdered in these regions. We are currently experiencing a serious conflict situation in the rural zone of the municipality of Curionópolis. The Regional Court of the 1st region ordered the rancher to vacate the area of public land known as fazendinha farm but he refuses to leave. While the court order continues to be disobeyed, there is a permanent state of conflict and tension in the area, placing workers’ lives at risk in view of the successive threats they receive.

In the state’s other regions we are also experiencing the violence of agribusiness, mining, hydroelectric power stations, the building of ports and illegal tree felling. All the rural peoples have been continually massacred by this development model that favours big business and oppresses the peoples and communities who live in this land, preserve nature and produce food. Our state is going through a process of pillage owing to the expansion of agribusiness and, at the same time, the bodies responsible for ensuring the right to land and territory, such as INCRA and FUNAI, have been continually depleted.

Criminalization has also been a perverse facet of violence against the fight for human rights. The case of the 23 rural workers imprisoned in October 2016 following the attempt to occupy Fazenda Serra Norte demonstrates that for the justice system the right to property is worth more that the right to life. Whereas 23 workers have been in prison for more than 10 months for occupying the headquarters of an estate, 10 workers were tortured and executed more than a month ago and nobody has been brought to justice.

We will never fail to mention violence in urban contexts charading under the false debate of the war against drugs which, in truth, means a war on the impoverished. Black youths from the poor outskirts of the city of Belém are victims of weekly slaughtering, and no one is brought to justice for this. Yet again, most of these killings are provoked by the state of Pará though its military police force.

Women are also victims of all this violence and suffer in an even more brutal manner the absence of rights and social policies. Violence against women has increased in the state of Pará over the last ten years and this reality also makes itself felt in the lives of women human rights defenders. We manifest our indignation about the murder of Maria Trindade da Silva Costa, a quilombola leader killed in the rural area of the municipality of Moju. Another outstanding woman leader of our state, Maria Joelma, whose partner was murdered, has lived under police escort for years. She is currently at risk of losing this escort, even though she is still being threatened.

It must be said that the justice system has been an accomplice of this scenario of violence countless times. Repossession orders had already been enforced three times at Pau D´Arco, for example, by the local military police, in contradiction of the state norm that determines that repossession should be done by special battalions from Belém. The Divino Pai Eterno Complex, located in the São Félix do Xingu region, has suffered for years the tardiness of the justice system in settling the land issue of an area which is known by all to be public.

All of this puts us in a state of permanent alert and, for this reason, it is vital that the human rights defenders protection programme be reorganized in the state of Pará. State Law No. 8444/2016, which created the programme in Pará, has been sanctioned, but the programme protocol has been discussed without the due participation of social movements and civil society organizations from all over the state. We therefore demand the recommencement of discussions about the programme protocol with the participation of representatives of the state’s regions and that the suggestions of movements, peoples and communities be duly taken into consideration when drawing up the protection policy. Only we know the violence that has been perpetrated against our struggles and our respective needs for protection. It is also essential that the Programme for the Protection of Victims and Witnesses be strengthened in Pará state.

We conclude by saying that we are reunited in the defence of our land and our territories against invasion by large estates, as well as the defence of the lives of women, Black youth, indigenous peoples and quilombola communities. We are human rights defenders.