After all, who is behind these crimes?

We talked a lot about the Market, the Companies, the Industry, the Ruralists. However, these otherworldly entities have names, they are part of our world, we can and must quote them so that they bear their blame: the meat industry, agribusiness giants and their financial market financiers are the biggest stimulators for attacks on the peoples of the Amazon – and, obviously, who profits the most from it. 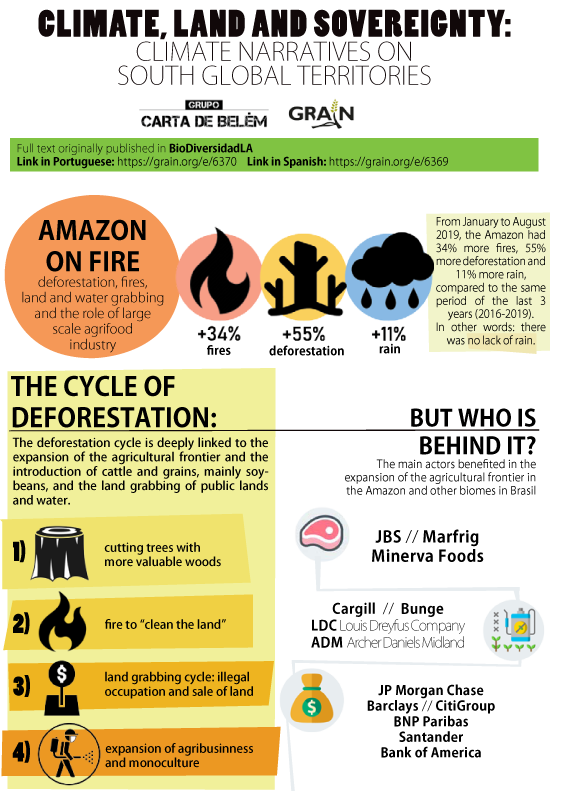 Although Bolsonaro’s government tries to blame the impoverished strata of society for the devastation of biodiversity in Amazon and throughout Brazil – saying that small farmers and communities are responsible for setting land on fire and losing control of it – an interesting report by The Intercept Brasil showed that, behind the burning forests and deforestation are powerful figures: “Public data from Ibama, the federal government agency responsible for preserving the environment, compiled and analyzed by De Olho nos Ruralistas, show that the 25 largest deforesters in the country’s recent history are large companies, foreigners, politicians, a company linked to a banker, frequenters of social columns in the Southeast region and three slave labor exploiters”.

This is part 4 of the introduction to the story “What really happens in the Amazon Forest”. Browse content:

It is in the midst of all this – land grabbing, fires, soy and its pesticides, megaprojects that destroy ways of life – that communities resist, even though they are under extreme pressure and life threats. These Communities and Peoples are also transformed into abstract entities, yet there are simple people, of common habits, taste for football, family lunch, bathing in the river, resting in a hammock. Small farmers, fishermen, extractives from legal reserves, quilombola communities and indigenous peoples who wanted, if they could chose, to just continue their lives in the place to which they belong and to maintain the forest with which they live and on which they depend standing.

Another world is not possible, there is only this one. Therefore the struggle
There is no possible coexistence with the infinite destructive desire of capitalist expansion: its poison runs through the surroundings, the lakes get polluted and dry up, the land is contaminated, people are expelled from their territories, attacked, cowardly murdered. Bolsonaro’s hate speech and the environmental and agrarian dismantling policies, in defense of the interests of agribusiness and foreign extractive industries, materialize in violence. For example: the murders of indigenous people grew 22.7% in 2018.

Against all of that, the struggle is most needed: daily, an ant work, little by little – as difficult and brutal as it is necessary and rewarding. This is what the stories we heard on the recent visit to the Tapajós region in Pará show. They show the siege of capital in the Amazon, with land grabbing, the advance of megaprojects over entire communities, the attack on the forest and rivers and the threats to those who oppose it, standing up in defense of traditional ways of life and the rights of peoples. It is not for nothing that these people are called Guardians of the Forest: we would not have thought of a fairer name.

Also read parts 2 and 3 of the introduction:
Who is favored by Bolsonaro’s responses to the fires?
The “win-win” of companies with the financialization of nature

And also: The siege explained on a map