What really happens in the Amazon Forest

We have visited the Tapajós region, in the state of Pará, Brazil, along with Terra de Direitos (Land of Rights, in English) and the Rural Workers Union of the cities of Santarém and Alenquer. We wanted to listen to the stories of peoples’ resistance to the siege imposed by capitalism on the Amazon. And the scenario, which was already frightening, worsens in the current pandemic context of Covid-19: land grabbers, miners and illegal loggers are not concerned with quarantining; on the contrary, they want to take advantage of the government’s paralysis to advance further over the territories. It is worth adding that, according to several studies, the expansion of agribusiness and the consequent environmental destruction is behind the advance of pandemics around the world, the coronavirus among them.

(The video has English subtitles, you only need to enable it)

Capitalism gears crush the Amazon, its people, the forest and its rivers: first, the expansion of soy and livestock, together with the illegal logging and sale of wood and the criminal fires that “clean the land” for agribusiness; second, mining and megaprojects of infrastructure necessary for the transportation of commodities and delivery of Brazilian common goods, such as ports and railways. All of them have a high impact on local communities. Facing all this, under a lot of pressure and living with constant threats, there are people standing and struggling – still strong. These are the stories of resistance that we will tell.

First, however, a brief introduction is necessary, so that we understand the context and complexity of these struggles. The introduction is divided into four parts: the first part follows this paragraph; the others can be accessed through the links that appear below the text. And after the links there are small summaries of each story that we will tell – they can be accessed by clicking on their title. 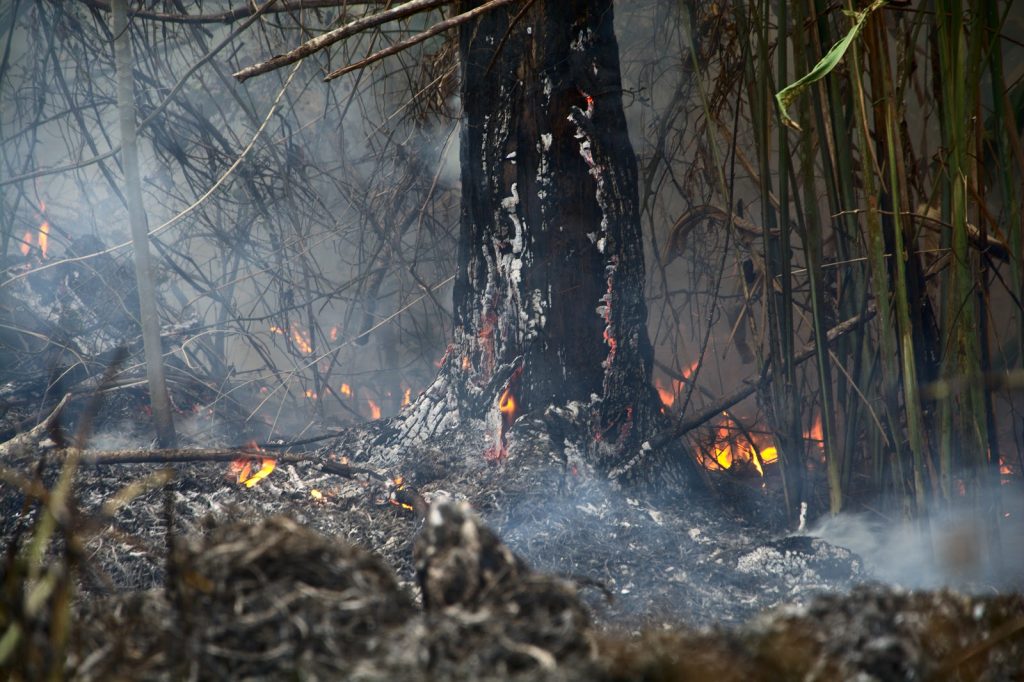 A brief introduction, divided into four parts, and then the stories

1. Context
It is not by chance that the fires in the Amazon region in 2019 caught the attention of the world: from January to August, in comparison with the same period of the last three years, the increase in fires was 34%; there was 55% more deforestation in the region; and 11% more rain, which shows that the cause of the fires was not the dry period, as some try to say, but human action.

Not a surprise: in August of last year, in reference to the Day of Fire, we were already saying (clicking on the link you’ll find the article in English below the one in Portuguese):

– The bloodstained hand that lit the flame is the hand of the free market: it is to the colonizing neo-liberal policy – so obediently embraced by Bolosarno’s government – that we credit the attack on peoples from the forest and their territories.

At the time of the 2018 election campaign, the complete absence of environmental policies already warned of what was to come. For example, the expression “environment” appeared only once in the government program of the candidate Jair Bolsonaro. Well… that he represents a huge setback for the environmental and agrarian agenda in Brazil, he made it quite clear himself, saying [to ruralists, of course] – This is your government. 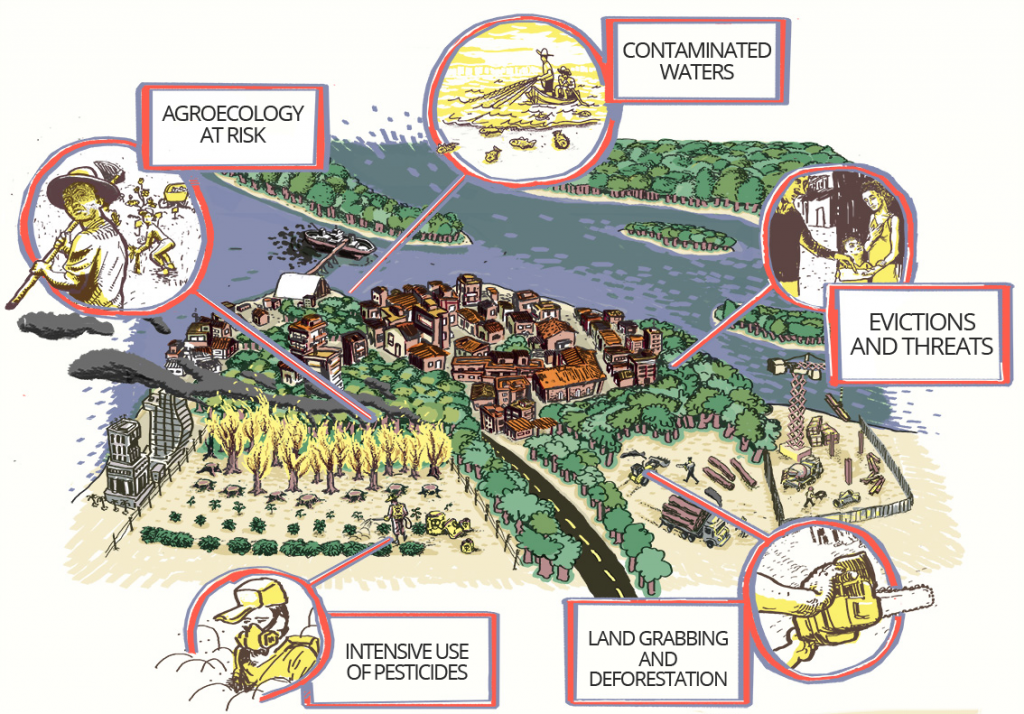 We know the capitalist lurking over the Amazon goes back to pre-Bolsonaro times. However, the worsening in the situation is equally obvious today: it is considered – it, the forest – an immense stock of land, a huge space available for the expansion of agribusiness that has already consumed almost all other biomes in Brazil (such as the “cerrado”, the “pantanal” and the “pampa”). Numbers can prove the harmful effect generated by the policies of the current Brazilian government: for the first time in the historical count, which started in 2002, there was an increase in fires in all biomes in the country. The devastated area in 2019 was 86% higher than the previous year. In the case of “pantanal” – the most affected biome, wich is a wet-land – the number is alarming: the increase in fires was 573% compared to 2018. The data are from INPE (National Institute for Space Research, in English), which Bolsonaro – also not by chance – insistently tries to delegitimize and to control (he has fired its president because of such numbers and evidences on the destruction of territories under his management).

It is no coincidence that the current government calls the Amazon Forest an “unproductive and desert region” (yes, they have said that). This is the neoliberal view and understanding of nature: a business to be explored, whatever the costs are – including lives.

In the links below, the introductory text continues. Click on each one to continue reading:

2. Bolsonaro’s answers to fires are in the name of the market and agribusiness land grabbers
3. The “win-win” of companies with the financialization of nature
4. But after all, who is really behind these crimes?

And below read some of the stories of peoples resistance to the capitalist siege on the Amazon and the struggle for their territories, for the forest and its rivers:

// THE SIEGE, DRAWN ON A MAP
The president of the Union of Rural Workers and Family Farmers of Santarém (STTR-STM), Manoel Edivaldo Santos Matos – also called “The Fish” – explains the siege of the capital to the Amazon based on a map of the Tapajós region. It is not by chance that the Guideline Plan of the city of Santarém was altered to suit the expansion of capital in the region – and the change occurred in the very end of 2018, in the last legislative session of the year. Santarém is located where the Tapajós and the Amazon River meet – one of the most important water channels in the Amazon.

// A PORT STUCK IN THE “RIVER MOUTH”
Port construction projects on the Maicá River put the way of life of 12 quilombola communities, native peoples and fishing communities at risk. One of the projects, which was more advanced, had its environmental licensing process suspended in Court, and the company must carry out a prior, free and informed consultation with the impacted communities – in accordance to the ILO Convention 169 (International Labor Organization).

// BEFORE THE PORT ARRIVES (IF IT DOES), THE IMPACTS ALREADY DID
It’s like that in all mega-enterprises and it’s not different in Maicá: even before a project is actually implemented, its damage to local communities can already be felt – from immaterial issues such as insecurity due to an unknown future (if families will be removed or not, and where to, or the sadness of seeing their territories and ways of life threatened); to very concrete ones, such as the threat from neighbors and land grabbing.

// HEALTH CENTER AND QUILOMBOLA SCHOOL: THE STRUGGLE CHANGES LIFE
The Tiningu community’s titling process, after a long delay, is almost complete: in October 2019, Incra (National Institute of Colonization and Agrarian Reform, in English) recognized the demarcation of the area and now only the presidential signature is missing – which, amid Bolsonaro’s hate speeches and financial cuts for the quilombola agenda, it is not “only”. But the Tiningu community is almost 200 years old and knows how to be patience.

// CURUAÚNA: ON ONE SIDE, SOY. ON THE OTHER, SOY ALSO
On the outskirts of Santarém, the soybean fields extend until the horizon is out of sight. Schools are surrounded by plantations, in which there is a high use of pesticides without respecting class schedules; the practice of the “puxadinho” stretches the soy fields little by little every year, burning the edge of the land; entire communities and cultures disappear, as families, tired of threats, abandon their homes and go to the periphery of cities. There is no possible coexistence with the destructive advance of capitalism.

// A FACE PRINTED ON A T-SHIRT
The murders of Maria do Espírito Santo and Zé Cláudio, defenders of peoples’ rights, and the path crossed with Maria Ivete, former president of the Union of Rural Workers and Family Farmers in Santarém. She lived for ten years with a police escort, part of the federal government’s Human Rights Defenders Protection Program.

// THE NIGHT OF THE MOTORCYCLES
In Alenquer, a municipality next to Santarém, two gunmen set up an ambush to assassinate José Marques. He is one of the leaders of a community of small farmers in the region, and the place is in dispute after land grabbing with the use of overlapping areas in the CAR (Rural Environmental Registry, in English). Without any inspection by public institutions, the 86 families who lived and worked there for about 13 years were evicted, a plot benefiting the interests of the land grabbers.

// IF WELL ORGANIZED, EVERYBODY FIGHTS
The struggle of the Union of Rural Workers and Family Farmers of Alenquer against the advance of agribusiness: the leaders suffer constant threats but even so, with a lot of organization and struggle – closed roads, pressure to mayors, siege to voting places -, rights are guaranteed.