A port stuck in the âmouthâ of the river

– ‘Visagem’? No ‘visagem’ has appeared in the woods, no, ma’am – said Narivaldo. It is in the water, and it in different forms; always finds a way to frighten us. (“Visagem” means, in local vocabulary, something similar to “ghost”). Nowadays in the region of Maicá, southeast of Santarém, the “visagem” has taken very concrete forms, everyone sees and worries: it is the shape of a port.

Embraps (Brazilian Company of Ports of Santarém, in English) intends to install a port at “Boca do Maicá” (Maicá’s Mouth), the entrance of the river that starts in the Amazon River and returns to the same river ahead, and then follow its flow towards the city of Macapá (AP) and to the Atlantic Ocean. Its waters have rich biodiversity and bathe around 50 communities, all of which are at risk if the port project goes on.

STORIES
1) The siege explained on a map
2)  [you are here] A port stuck in the “mouth” of the river
3) Before the port arrives (if it does), the impacts already did

And so it’s not a “visagem” after all: it is the reality that haunts; and it is between storytelling and laughter that Narivaldo dos Santos tells us about the Environmental Impact Study of Embraps – You know, I fish here pirarucu, tambaqui, surubim, pacu, acará, pescada, aracu, carauaci, arauanã, acari, fura-calça, mapará, which is white, right… [those are species of fish] – And there’s a lot more, because when I talk about acará, there are about eight types of it only here in our region: the purple, the bararuá, the boca-de-pote, the escama-grossa, the tinga, the açu… The tucunaré also: there is the açu, the pinima and the regular, and the surubi cabeça-chata, pinima and pintado… and so on. It is so much that we can say – Today I don’t want this one, then let one go and grab the next one: it’s a rich menu. But in the study of the company they say there are almost no types of fish here, and neither birds, alligators, capybaras, armadillos, nor the sea-cow, which is endangered and we find it here in our river…

Well, maybe the Embraps researchers do not know how to fish.

Narivaldo is the leader of the quilombola community of Bom Jardim. He is 42 years old and doesn’t seem to be: he runs fast through the fallen trunk trees that serve as a path to the area where the canoes and boats of the fishing community rest. Of the approximately 120 families, at least 90 fish in Maicá waters, some as businness others just for subsistence. With agile steps, it makes it look easy which it definitely is not: but although tortuous, the logs are still a path, and after about ten minutes of fragile balance on the woods we arrive at a beautiful bay, where the green grass meets the calm waters of the river, and the canoes are slightly agitated. Rowing, Santarém’s downtown is a couple of hours away. 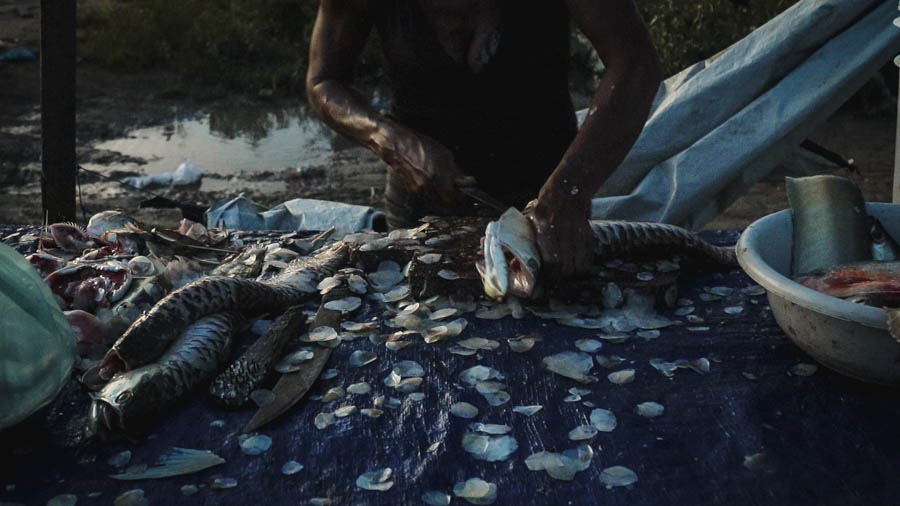 Sometimes a fish ventures in a jump, as if to show off the river’s richness – You don’t even have to go far to find several types of fish, Narivaldo laughs again, before talking seriously – Regarding the government, we realize that they don’t care about the Amazon, about our rivers. In a way, the order for the construction of the port has already been given. It only stopped due to the action of FOQS [Federation of Quilombola Organizations of Santarém, in English], which filed the request for prior consultation with the MPF [Federal Public Ministry, in English]. Depending only on the government, the port will happen, the quilombola communities want it or not: but whatever we can do to avoid it, we will do. They say that the impacts can be compensated, but that doesn’t exist: we want to live as we do today.

The installation of a port in Maicá (not just one: there are projects for five ports on the river) will mean the destruction of that way of life and is a direct attack on the surrounding 12 quilombola communities, Bom Jardim among them. In their will, the former slave owners of the local farm, who had no heirs, left the land for the six families who were exploited there. That was 142 years ago: it’s been almost two centuries of belonging and fighting in that territory. Now, in name of the profit of a few, everything can disappear.

Prior consultation and ILO Convention 169
However, popular and legal mobilization – with the support of Terra de Direitos (Land of Rights, in English) – had effect and the project’s licensing was suspended. The company must carry out prior, free and informed consultation with all affected communities – quilombolas, indigenous and fishermen – in accordance with ILO Convention 169 (International Labor Organization). Embraps’ studies were so shallow that they did not even consider the quilombola component, so relevant in that area, which should also be added in a new study to be presented by the company. Although it has no veto power, mandatory consultation with affected communities can be considered a victory: after the favorable court decision, the 12 communities organized within FOQS rushed to build their own Consultation Protocol, what was also done by the impacted communities of indigenous peoples and fisheries. 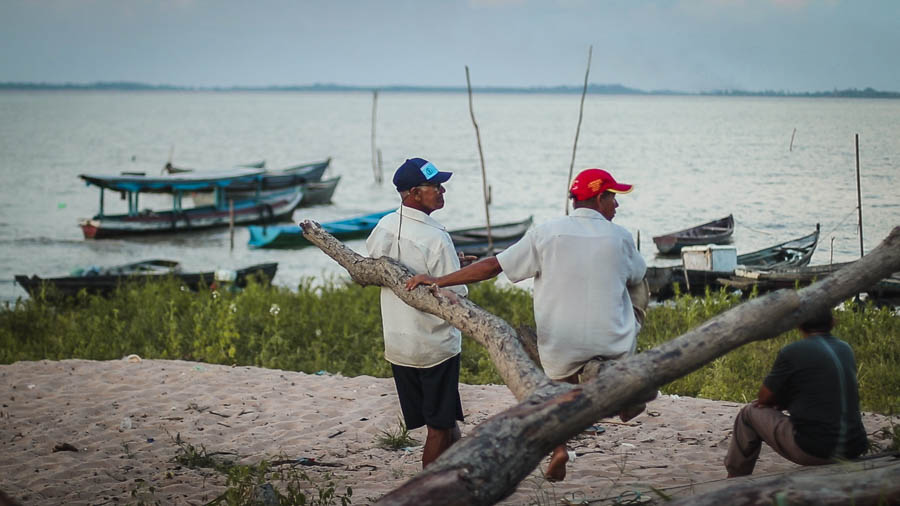 The suspension of licensing also delays the project schedule, allowing more time for the dissemination of information in the region. Embraps’ forecast was that, in the first year of operation alone, 4.8 million tons of soybeans could be exported through the port installed in Maicá, much of which came from the Midwest region of Brazil through the BR-163. It’s easy to see thatthe whole colonial infrastructure of capitalism impacts the territories – ports, monocultives, mining, roads, railways. Another example is “Ferrogrão”, a railway project that will connect the city of Sinop (MT) to Itaituba (PA) and which will also cause damage along its path, especially in conservation units and indigenous lands.

A port where there should be no port
A strange fact, however: in the same place where the Embraps port was to be installed, another project emerged – a fuel station for boats, in spite of impact studies or community participation. The responsible company is Atem’s, an oil distributor that operates in the North of Brazil. The damage is already being felt, especially in fishing, with the spillage of fuel and the grounding of the area, which changed the flow of water and fish. In March of this year, the Pará Public Ministry denounced the company, its managing partner and the engineer responsible for the project for the practice of environmental crimes. For them, the work proceeded without a license from the competent environmental agency, in addition to having submitted a divergent license to the State Secretariat for the Environment of Pará, which referred to non-hazardous cargo – when the objective was known from the beginning: construction and port installation for fuel distribution (dangerous cargo).

Struggle history
But in May 2020, at last, good news: the Federal Court suspended the licenses of Atem’s port and determined the immediate stoppage of the works. The victory comes after a long mobilization of the social movements of Santarém against yet another enterprise that, without any consultation with the local communities, violated rights and compromised the region’s biodiversity.

These are the lines of the siege of agribusiness to the territories: expulsion of families from their land for soy planting; contamination of neighboring lands by the use of pesticides; the transport of grains tearing territories – whether by truck or train; their arrival in ports that destroy the traditional ways of life in the sorrounding area; exporting goods to generate wealth for international capital. The progress of the Embraps project also represents the removal of families and the demolition of houses for the expansion of roads, the arrival of hundreds of workers from other states, a complete change in the daily life of the region: the evaluation is that about 900 trucks per day will pass through the streets of the neighborhood on the way to the port.

The fight against Embraps has been going on since 2013 (in this timeline, organized by Terra de Direitos, see the chronology of resistance to the construction of ports in Maicá – in Portuguese). There are five ports planned for the region, by three companies – all aimed at the export of grains and commodities, especially soybeans. In addition to Embraps, the construction of other ports aims to favor the activities of the algerian Cevital Group, which operates in the agri-food sector and is involved with plantations in the Midwest region of Brazil; and the company Ceagro.

Also read parts 2, 3 and 4 of the introduction:
– Who is favored with Bolsonaro’s responses to the fires?
– The “win-win” of companies with the financialization of nature
– After all, who is behind these crimes?

And the stories:
– The siege explained on a map
– [you are here] A port stuck in the “mouth” of the river
– Before the port arrives (if it does), the impacts already did