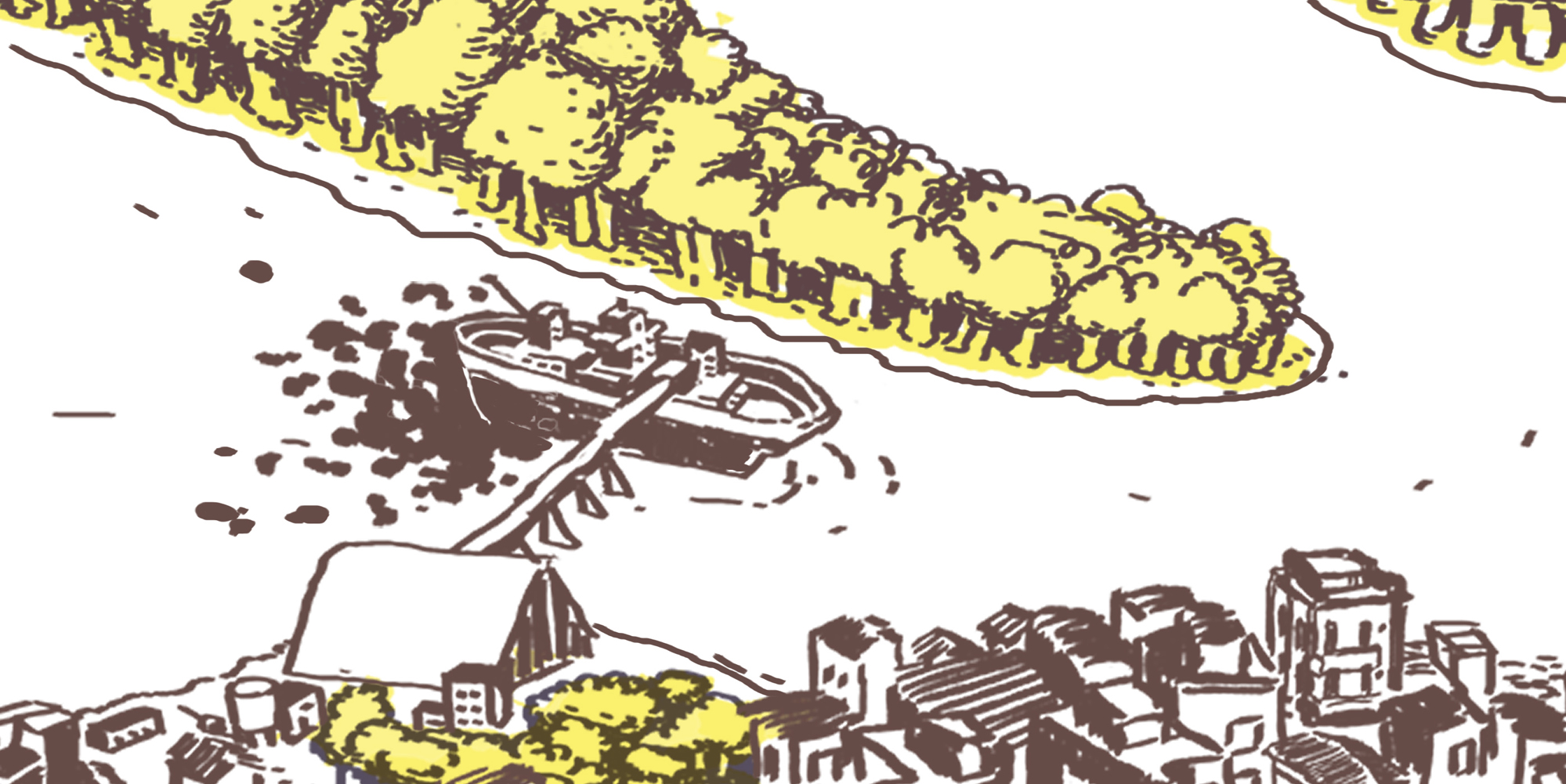 Transquilombo: this is how the bumpy road that connects all quilombos to the south bank of the Maicá River is called by close ones. By it, leaving the Bom Jardim quilombo you can reach Tiningu in just a few minutes. And it is in Tiningu that Bena is found, or rather: Raimundo Benedito da Silva Mota, historical character of the region – I have been following the leaders since I was 15 years old, today I am 60: 45 years of struggle. Today, Bena is president of the Quilombo Tiningu Remnants Association and vice president of FOQS (Federation of Quilombola Organizations in Santarém, in English).

45 years: Bena has seen the world come and go and come back and remain where it is, so he speaks calmly. And he recommends calm too – This is an area for who managed to escape from the “senzalas” [slave quarters]; you have to be patient with the historical moment. The Tiningu community has existed since 1844 – it is 176 years old – and it was only in October 2018 that Incra (National Institute of Colonization and Agrarian Reform, in English) published the community recognition and demarcation decree in the Official Gazette. The white bureaucracy was late by almost two centuries – and there is still one last step for the final title: the signature of the President of the Republic. He, Jair Bolsonaro, the same who said – I went to a quilombo once. The lightest African descendant there weighed a hundred kilos. They do nothing. I don’t think he was usefull even as a breeder; and also – As far as I’m concerned, everyone will have a gun at home, there won’t be an inch demarcated for indigenous reservation or quilombola. Obviously these racist speeches echo in the racist structures of the Brazilian State: for example, the allocation of public resources for the titling of quilombola territories has fallen by more than 97% in the last five years.

This is part of the story “What really happens in the Amazon Forest”. Browse content:
INTRODUCTION

STORIES
1) The siege explained on a map
2) A port stuck in the “mouth” of the river
3) Before the port arrives (if it does), the impacts already did
4) [you are there] Health center and quilombola school: the struggle changes life
5) Curuaúna: on one side, soy. On the other? Soy also

Even so, Bena doesn’t lose his temper: what are four years, or a handful more, in the face of centuries of resistance – Uncle Babá who told me all stories, he was 108 years old, and Bena still keeps the oral tradition alive and tells and retells the stories of Tiningu, from the days when his neighbors and family members had to leave the region because the children suffered from anemia and there was no health center nearby; so it was necessary to row for almost two hours until reaching Santarém, but the adults also lacked strength because they lacked food as well, regardless of age, and also lacked education: so everyone left for Santarém and went to live on the periphery of the city, leaving behind their culture and their place in the world. 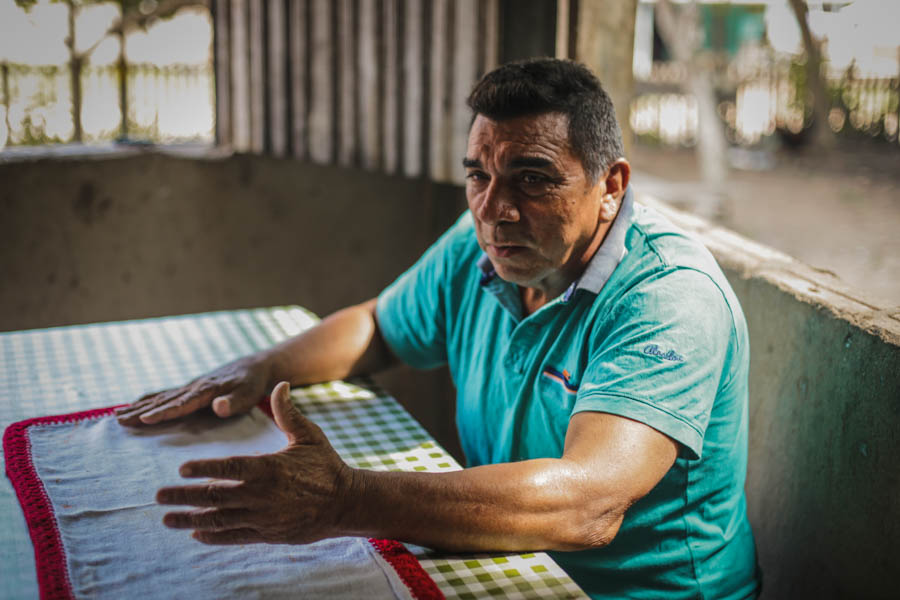 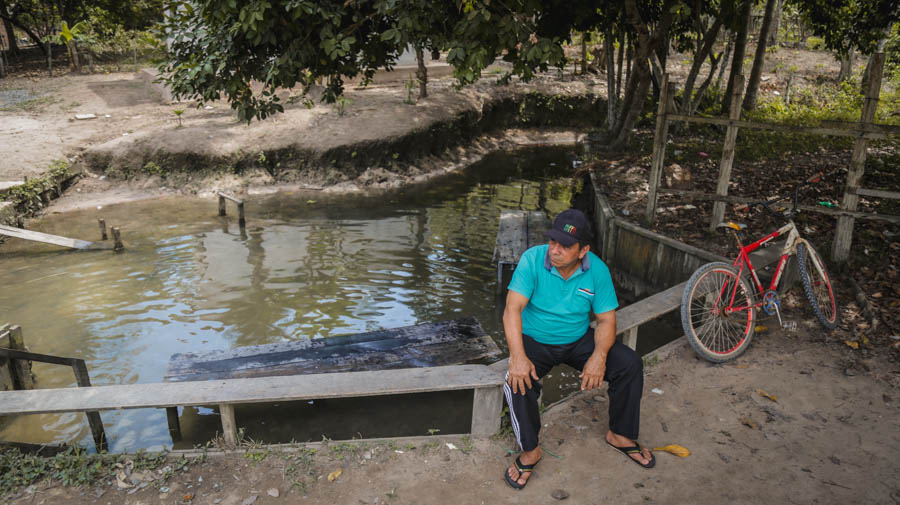 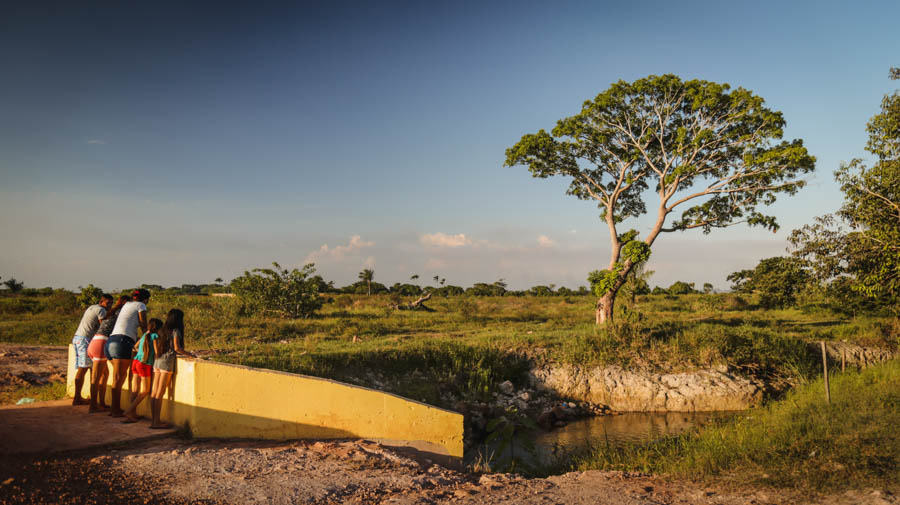 Until one day they came back, and they came back because it was worth going back, and then the families stopped leaving. There is no chance there: everything happened due to the organization of the quilombola struggle, initiated by Bena himself, who one day at a seminar in the capital Belém discovered himself to be quilombola: he heard about studies regarding the territory of Tiningu and its history, which proved to be an area of slave remnants there.

Bena brought this information to the community and was surprised: many of his black neighbors refused to be called quilombolas, reproducing a discourse of prejudice against this population.

At the first meeting convened to discuss the issue, only 17 families appeared – Bena’s brother, his parents and his uncles included. Very few. But time passed, the struggle continued, and the quilombola association managed, pressuring the Santarém City Hall, to get funding for a health center and a new school, now with elementary school – before, there was only one nursery school in the region. As soon as today in Tiningu, 90 families call themselves quilombolas and proudly await the title of their land, a measure that will bring security to conflicts with local farmers.

Conflicts with local farmers: cut in access to water and murder
One of them, a neighbor on a higher land, claiming to own the pond between his farm and the quilombo, cut off access to water for the entire community. Even the health center was short of supplies and had to stop attending. The case went to Court.

In the name of the memory of his people, Bena takes good care of the local cemetery – the area was in dispute with another farmer, who had to give in due to the historical importance of the site. The land of this farm is now cut out by a square where gravestones with bodies and stories of struggle are buried. It is there that he recalls another recent case: the keeper of another farm, in a conflict of little explanation, murdered one of the quilombolas, supposedly after a fight. He is a fugitive to this today.

In the name of memory, Bena outlines a plan: to transform the old children’s school into a museum of quilombola history in the region. Uncle Babá’s oral record will gain historical preservation and no one will ever again forget that the struggle changes life.

And the stories:
1) The siege explained on a map
2) A port stuck in the “mouth” of the river
3) Before the port arrives (if it does), the impacts already did
4) [you are there] Health center and quilombola school: the struggle changes life
5) Curuaúna: on one side, soy. On the other? Soy also