With the participation of Conaq, the government has 30 days to elaborate a plan. Justices also suspended evictions and displacements. 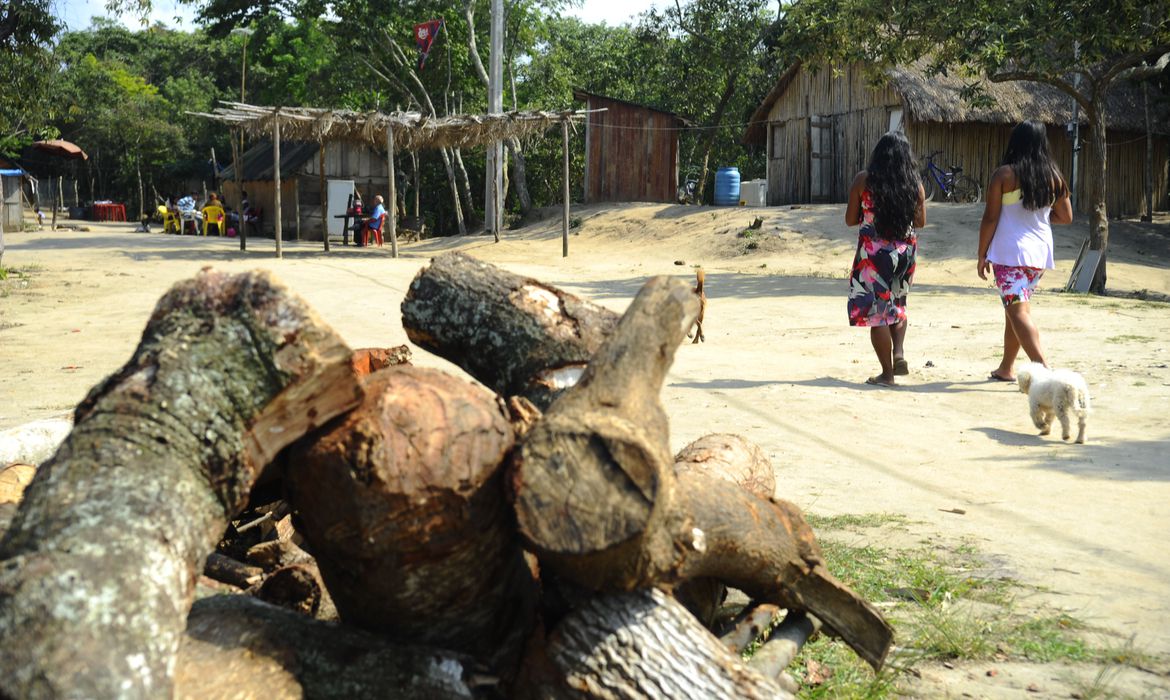 The Brazilian State must develop, in 30 days, a National Confrontation Plan against the Covid-19 pandemic oriented to provide protection to quilombola communities. That’s what the Federal Supreme Court justices determined in the ruling of the Pleading of Non-Compliance of Fundamental Precept (Arguição de Descumprimento de Preceito Fundamental – ADPF) No. 742/2020, which was concluded in the evening of last Tuesday (23), in a virtual plenary.

Due to extremely low access to public water supply, the public health system, and sewage, among other factors, these communities are living in extremely vulnerable social conditions, which are worsened in the pandemic context. The disease’s greater intensity and lethality among the black population is another factor pointed out by organizations that require urgent and specific actions to confront the pandemic. Nevertheless, the black population represents only 19% of the country’s vaccinated population, although according to the IBGE it constitutes 56% of the Brazilian population. This evidence shows the disproportionate nature of the pandemic impacts – more intense among the black population – as a result of socioeconomic inequality and the State’s absence and which are revealed in the smaller percentage of vaccinated black people.

“This victory places parameters upon ourselves – of putting what we had already demanded to the government – regarding a plan that not only prevents the pandemic’s advancement in quilombola territories but that will also guarantee the provision of food security, vaccines, tests, and mass immunization. The Federal Supreme Court took an important step by recognizing the right of those who are also right holders. The communities are an extensive group and the black population is the most killed by Covid-19 since they can’t afford access to healthcare, and this decision means progress towards equality”, points out the member of Conaq’s coordination, Biko Rodrigues.

The government will have a deadline of 72 hours to elaborate a plan for the establishment of an interdisciplinary workgroup. In addition, the government has 72 hours to include information about race and ethnicities among the records of Covid-19 cases and to resume public platforms of information access, such as the websites that previously displayed information on the Brasil Quilombola Program, and the monitoring conducted by the Secretary for Policies Promoting Racial Equality (Secretaria de Políticas de Promoção da Igualdade Racial – Seppir) with information regarding the quilombola population and the access to public policies.

“It was an unforgettable victory. Out of the victories that we had, this is a historical one, since it’s the first time we looked for the Federal Supreme Court for the realization of a safeguarded right that was not yet implemented. It is a wonderful and emotional victory, after several disputes, hardships and confrontations since the beginning of the pandemic”, highlights Conaq and Terra de Direito’s legal advisor, Vercilene Dias, about the uniqueness of Conaq’s incidence on the Federal Supreme Court.

The judgment of the plead also carries other two historical facts: by admitting Conaq’s legitimacy on filing the lawsuit, the Federal Supreme Court acknowledged the Quilombola Coordination as a national class entity and female quilombola lawyers presented verbal statements. Vercilene, a quilombola from the Kalunga territory (GO), was Conaq’s representative. Moreover, Gabriele Gonçalves, a quilombola woman from the Quilombo da Rasa in the city of Armação dos Búzios (RJ), was Terra de Direito’s – organization that acted as the judgment’s amicus curiae – legal advisor who also participated in the virtual judgment.

“This victory, besides recognizing structural racism, also reclaims the constitutional rights conferred since 1988 [established in the Federal Constitution]. The normalization of the pandemic consequences in the context of quilombola communities, who were already agonizing due to the absence of basic conditions for their survival, only displayed a perspective of racial violence. As long as this violence continues we will not be before a democratic State”, emphasizes Gabriele. 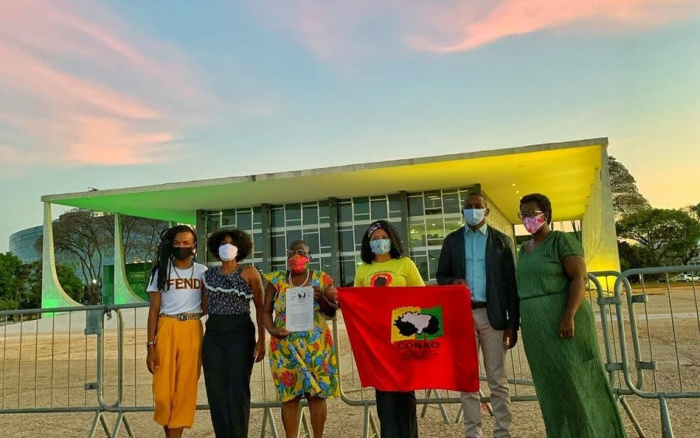 The results of the plead’s judgment presented the majority of votes partially disagreeing with the reporting justice in the case, Justice Marco Aurélio. In his vote, the justice recognized the Federal Government’s omission in protecting quilombola people and determined the elaboration of a National Confrontation Plan against the pandemic’s impacts among quilombola but failed to acknowledge important points of Conaq’s plead. The reporting justice has not ensured the suspension of ownership repossession measures in land conflicts encompassing quilombos, although only 7% of quilombola communities out of 5.972 have land title registration (IBGE Data).

When voting, Justice Edson Fachin joined the reporting justice in creating a plan but partially differed in his vote and accepted Conaq’s request in the ADPF to suspend evictions. “Preserving the proceeding of processes, with the risk of ownership repossession, aggravates the situation of quilombola communities, which may suddenly end up clustered, abandoned, and lacking the minimum hygiene and social distancing conditions to reduce their risk of being infected by the coronavirus”, Fachin pointed out.

Justice Nunes Marques was the only one who joined Marco Aurélio. In his vote, the justice didn’t recognize Conaq’s legitimacy in filing the action and questioned the ADPF’s merit by arguing that other quilombola-oriented measures were already set out, such as Law No. 14.021/20, which establishes protection measures for indigenous peoples and encompasses the quilombola population in a few points. The violation of the law and the lack of actions by the Federal Executive branch, however, were denounced by Conaq in the ADPF. In addition, Nunes Marques downplayed the level of vulnerability of the quilombola and black populations, stating that “the virus does not recognize ethnic, economic or social differences”. Nunes was the justice appointed by Jair Bolsonaro (no party). Aligned with the president’s vote, who has previously presented opposition to quilombola policies and stated that will not safeguard “any centimeter of land to indigenous and quilombola peoples”. Nunes confirmed in his vote the lack of commitment to protecting the lives of quilombolas in the face of the most intense epidemic crisis lived by Brazil.

According to Maíra Moreira, Terra de Direito’s legal advisor, Edson Fachin’s dissenting vote followed by the ones of other eight justices, marked a victory to every quilombola community in Brazil, who are victims of conflicts involving the ownership of their land. “This victory represents great progress in the understanding of land conflicts and how they undermine and weaken the quilombola population during a pandemic period. It is a ruling that also creates an understanding of the vulnerability situation of these communities regarding processes of land ownership of their territories”, she asserts.

“Eviction suspensions are very important. The pandemic continues, and construction works in the territories have not stopped. We have always called on the government and the Federal Prosecutor’s Office (MPF) to not make the opposite of what international organizations and health secretaries determine – which is to stay at home. It is unbelievable that people may be displaced of their homes, all the more during a pandemic”, highlights Biko. Staying at home and social distancing have been repeatedly identified by the World Health Organization, research institutes, and healthcare organizations as the most efficient measures to prevent the spread of the virus.

Quilombola Vaccinometer
08/31/2021
The Brazilian Government systematically violates Convention 169, as denounced by organizations to the ILO
07/16/2021
Study on the social, and environmental impacts of Cargill in the TapajÃ³s is released by Terra de Direitos
06/28/2021
What are the threats behind the militarization of the fight against deforestation in Brazil?
06/26/2020
What really happens in the Amazon Forest
06/02/2020